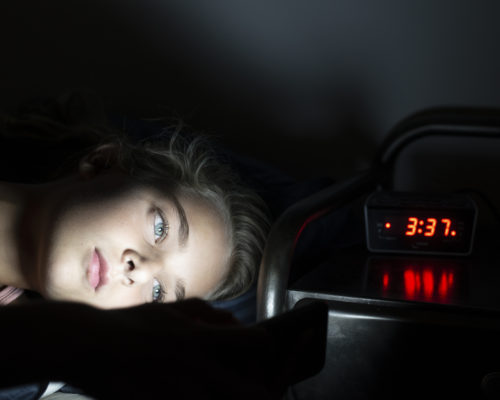 Sleep loss can affect many aspects of health. It has long been known that a lack of sleep can interfere with learning, and a new study shows how crucial it can be for consolidating memories.

The study, which appeared in Biological Psychiatry: Cognitive Neuroscience and Neuroimaging, suggests that sleep loss can hijack the brain’s ability to unlearn fear-related memories. This could lead to a greater risk of conditions such as anxiety or post-traumatic stress disorder.

A three-phase experimental model was used for the acquisition and overcoming of fearful memorie,s while participant’s brains were scanned using functional magnetic resonance imaging. In the fear conditioning, participants were presented with three color, two of which were paired with a small electric shock. The last color was presented with no shock, creating an illusion of a “safe” color.

The same evening, participants were tested once again on the three colors. This showed the subject’s reaction to measure their fear extinction recall, or if they had “unlearned” the threat of the shocks associated with the colors.

Limit Night’s Sleep May Be Worse

Researchers were surprised to find that participants who got no sleep lacked the brain activation in fear-related areas during fear conditioning and extinction. During the recall, the brain activity of these participants was similar to those who got a normal night’s sleep. This could mean that a limited night’s sleep may be worse than none at all.

Researchers of the study hypothesize that sleeping only half the night resulted in a loss of rapid eye movement (REM), which is known to be important for memory consolidation.

Many medical workers and soldiers have interrupted sleep, which, according to this study, could be worse than missing an entire night’s sleep. These individuals may be especially vulnerable to fear-related conditions such as post-traumatic stress disorder.

Sleep deprivation has been studied at length, but this research shows there is still much more to learn about the importance of getting a good night’s sleep. More research is needed to find the relationship between the loss of REM and learning ability.

Living a healthy life includes eating a healthy diet, getting plenty of exercise, and making sure you get enough sleep. This study confirms that getting interrupted sleep, or even half a night’s sleep, can cause problems in thinking and memory. It is recommended that adults get 8 to 10 hours of sleep a night.