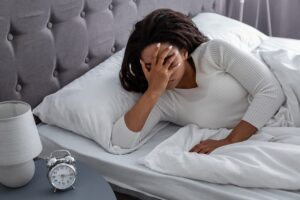 A lack of sleep could lead to an increased risk of developing glaucoma and sight loss, according to a recent study. Glaucoma is a leading cause of blindness, and the findings suggest that getting enough shut-eye may be an important factor in prevention. Additionally, researchers believe that poor sleep can lead to several health problems, including inflammation and insulin resistance, both of which are known risk factors for glaucoma. If you want to protect your vision, getting enough rest every night is important!

For the study, researchers drew on 409,053 participants from the UK Biobank, all of whom were aged between 40 and 69. They were followed from 2006 to 2010 and analyzed the details of their sleep behavior.

It was found that those with glaucoma tended to be older and more likely to be male, with high blood pressure or diabetes, and were chronic smokers. Sleep patterns were also associated with varying degrees of heightened glaucoma risk. Short or long sleep duration was associated with a heightened risk of 8%; insomnia, 12%; snoring, 4%; and frequent daytime sleepiness, 20%.

While many explanations exist for the associations between sleep disturbances and glaucoma, more research is needed to confirm the findings. However, researchers suggest it may be due to the eye’s internal pressure. This key factor in the development of glaucoma rises when a person is lying down and when sleep hormones are out of order.

Another possible reason may be due to depression and anxiety, which often go hand in hand with insomnia. Researchers believe this could possibly be due to
dysregulated cortisol production.

Researchers concluded, “As sleep behaviors are modifiable, these findings underscore the necessity of sleep intervention for individuals at high risk of glaucoma and potential ophthalmologic screening among individuals with chronic sleep problems to help prevent glaucoma.”

As this research proves, it is vital to take steps to ensure sleep patterns and vision are kept as healthy as possible as you age. One of the primary causes of age-related vision loss is low levels of lutein and zeaxanthin. These natural pigments have been shown to protect the eye from oxidative damage caused by ultraviolet light and environmental factors.
Some of the best sources of lutein and zeaxanthin, but it is difficult to get enough of these pigments from diet alone. 20/20 Vision contains 20 mg of lutein and 2 mg of zeaxanthin to help give your eyes the nutritional support they require. In addition to those two ingredients, this unique formula also contains various vitamins, minerals, and herbal ingredients to help support and maximize vision and eye health.

Sleep Sure Plus is designed to help promote optimal sleep and restfulness through a variety of ingredients. One of the most important ingredients included in this unique formula is melatonin. Melatonin is a hormone that is essential for the regulation of the circadian rhythm (the internal clock of the body). Sleep Sure Plus also contains valerian, one of the best natural ingredients for promoting rest and relaxation. These two essential ingredients are joined by another 6, which all work together to provide a better quality of sleep.