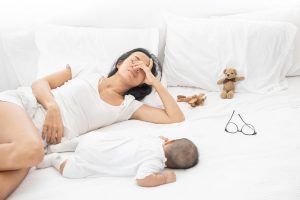 New mothers experiencing sleep loss may be speeding up their aging. According to new research published from UCLA, too little sleep in the first six months after birth can add three to seven years to a woman’s “biological age.”

The study published in Sleep Health studied 33 mothers during their pregnancies in the first year of their baby’s lives. They analyzed women’s DNA blood samples to determine their biological age, as it can differ from chronological age.

It was found that a year after giving birth, the biological age of mothers who slept less than seven hours a night at the six-month mark were 3 to 7 years older compared to those who got 7 hours of sleep or more.

Those who slept less than seven hours also had shorter telomeres in their white blood cells. Telomeres are small pieces of DNA at the ends of chromosomes that act as protective caps, similar to plastic tips on the ends of shoelaces. Shortened telomeres have previously been linked to a higher risk of cancer, cardiovascular disease, and other illnesses, along with earlier death.

Researchers suggest that new mothers take advantage of opportunities to get a little extra sleep. This could include taking naps during the day when their baby is asleep, accepting offers of assistance from family and friends, and asking their partner to help with the baby during the night. They believe mothers who take care of their sleep needs will ultimately help themselves and their babies in the long run.

Accelerated biological aging linked to sleep loss could increase women’s health risks. The study used the latest scientific methods of analyzing changes in DNA to look at biological aging. This type of aging is also known as epigenetic aging. DNA creates the code for making proteins that carry out many functions in the cells of the body.

Epigenetics focuses on whether regions of this code are open or closed. When access to DNA code is closed, genes for specific proteins cannot be expressed and are therefore turned off. This means the greater the individuals biological or epigenetic age, the greater risk of disease and earlier death.

“The early months of postpartum sleep deprivation could have a lasting effect on physical health,” said the study’s first author, Judith Carroll, “We know from a large body of research that sleeping less than seven hours a night is detrimental to health and increases the risk of age-related diseases.”

The study’s cohort was not a large representative sample of women, so more studies are needed to better understand the long-term impact of sleep loss on the physical and mental health of new mothers. However, this study adds to the mounting evidence of the importance of sleep, not just in new mothers but for everyone.