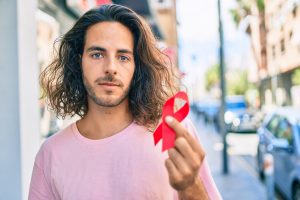 A new AIDS study from the University of Alberta has found that people living with HIV have a higher risk of rapid aging and chronic inflammation. The groundbreaking research found that elusive white blood cells called neutrophils play a role in impaired T-cell functions and counts. It was also found that the associated chronic inflammation common with the virus plays a role.

Neutrophils are a part of the body’s immune system and the most abundant type of white blood cell. They make up approximately 60 to 80% of circulating immune cells in the blood. Unlike other white blood cell types, neutrophils are short-lived and cannot be frozen and thawed as other immune cells can. This makes them extremely difficult to examine in a research setting.

Researchers examined the fresh blood of 116 people living with HIV and 60 others without the virus for the study. Comprehensive sequencing on all genes expressed in the neutrophils was analyzed from both groups of participants to determine any differences between them.

Study lead Shokrollah Elahi said, “We found that not all HIV infected individuals have similar types of neutrophils. As the HIV disease progresses, neutrophils become more activated and more potent, and in turn activate the body’s T cells, which most likely causes some of the problems associated with HIV infection such as inflammation and rapid aging.”

Researchers believe that neutrophils can act as an early alarm system. When they detect dangerous compounds such as an invading microbe, they release proteins to signal other immune cells to the danger. One of these proteins released has been previously linked to severe inflammation.

The study of neutrophils has revealed that the reaction of shedding proteins has been associated with oxidative stress, a state in which the body cannot naturally detoxify from specific molecules that can become harmful to cells.

Based on these findings, researchers believe that they may be able to stop some of the progression of oxidative stress in HIV patients. If the virus is caught early enough in those with HIV, it can help to stop the disease progression and reduce many of the complications associated with AIDS.