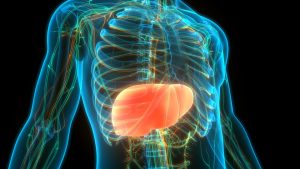 People with higher levels of liver fat may be more at risk for type 2 diabetes (T2D) compared to those with lower levels. New research presented at the European Association for the Study of Diabetes (EASD) found that the amount of liver fat stored in the organ may be related to diabetes, regardless of their BMI.

Type 2 diabetes is the most common form of the disease and occurs when the pancreas can’t make enough insulin or when the insulin it produces doesn’t work properly. Insulin is a hormone that helps turn sugar into energy.
Previous studies have found that intensive weight loss programs can put T2D into remission in people who are overweight. Researchers believe this is because of the excess fat in the liver, preventing insulin from working properly. Also, fat in the pancreas can stop the insulin-producing cells from working properly.

This latest research from Newcastle University examined intra-organ fat in people of normal weight with type 2 diabetes. It also looked at how these levels changed after weight loss-induced remission.

Both groups followed a weight management program designed for the remission of T2D through 10-15% weight loss. This consisted of all participants consuming 800 calories a day, followed by support in maintaining their new weight.

Scans were used to measure levels of fat in the pancreas and liver before and after weight loss.

It was found that compared to people without diabetes, those with T2D had higher fat levels in the liver and pancreas, regardless of their BMI. Liver fat fell dramatically in the obese group following the weight loss program, from an average of 16% to 3%. In the normal-weight group, the liver fat decreased from 4.7% to 1.4%.

Overall, 60% of the obese participants achieved remission of type 2 diabetes, and 67% of the normal BMI group saw remission. Remission was defined as having average blood sugar and being off all medications.

The author of the study, Roy Taylor, concluded by saying, “It clear that if an individual has type 2 diabetes, they have more fat inside their body than they can cope with, even if they seem to be slim.”

“These results also show that levels of liver fat vary with weight and that levels currently considered to be healthy can actually be harmful in lighter people.”