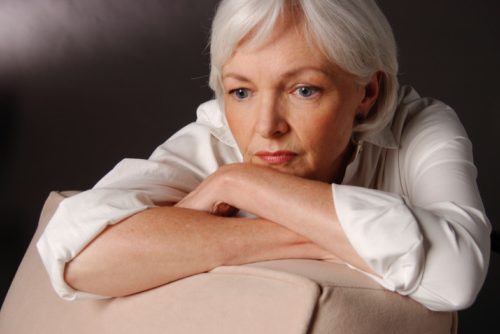 When people suffer from Alzheimer’s disease, it is not unusual for them to also experience depression. Now, researchers believe that being depressed might actually speed up the onset of this disease.

Alzheimer’s disease is characterized by memory loss, confusion, and emotional instability. Health experts have never been able to pinpoint the exact cause; however, they have determined the factors linked to a higher risk of getting the disease. These factors include: genetics, lifestyle and the environment.

Click here to find out how you can improve your memory, concentration, get rid of fuzzy thinking, and boost your mood.

Researchers at the University of South Florida used genetically engineered mice, as well as post mortem human Alzheimer’s brain tissue in their study.  They discovered that when the stress-related protein FKBP51 partnered with another protein, known as Hsp90, it helped prevent the brain from clearing the toxic tau protein that is associated with Alzheimer’s disease. Under stress free circumstances, tau helps make up the skeleton of brain cells.

The level of stress-related protein automatically increases as we age, but the researchers say when it partners with the protein Hsp90, it makes tau more deadly to brain cells. These are the cells that are responsible for the formation of memory.

Two other studies conducted back in 2010 seemed to suggest that depression may in some way be linked to Alzheimer’s. At the time, the evidence was considered somewhat controversial because a large part of it was based on information collected through interviews with participants and their family members, as opposed to strictly medical tests. Now that the University of South Florida study has been published in The Journal of Clinical Investigation, these other studies are being looked at again in a more serious light.

The two studies showed that older adults with symptoms of depression had a higher risk of developing Alzheimer’s than those who didn’t have signs of depression. In one of the studies, which was conducted through the University of Massachusetts Medical School, depression and dementia was monitored over a prolonged period in over 900 people.

At the beginning of the study, none of the participants had any signs of dementia; however, by the end of the study, 136 participants developed Alzheimer’s and 28 had dementia of some kind. Close to 22 percent of those who were depressed at the beginning of the experiment later developed dementia. After taking genetics and lifestyle factors, such as smoking into consideration, the research team discovered that depression increased the risk of getting dementia later on by 50 percent.

The authors of this study say because this was a long-term study period (17 years in total) and that it is unlikely that any of the participants had dementia-related brain damage at the beginning of the investigation. At the time, the researchers couldn’t say why depression was linked to the disease.

Depression can be a vicious cycle. It leads to other problems like insomnia and weight gain, which in turn leads to other health problems including high blood pressure, stroke, heart disease, and diabetes. The latest study on Alzheimer’s and depression just gives us another reason to not allow stress and anxiety to fester. If you or someone you know is showing signs of depression, make sure you reach out to a doctor, a local mental health agency or hospital. In times of crisis, hospital staff can help or tell you where you can go to seek professional treatment.