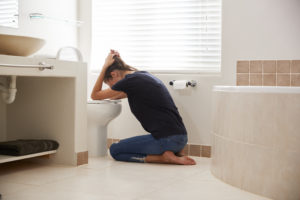 Pregnant women who experience severe morning sickness, known as hyperemesis gravidarum (HG), are more likely to have an increased risk of depression. The debilitating condition is much more severe than ‘normal’ morning sickness and is one of the most common reasons for hospitalization during pregnancy.

Severe morning sickness affects around 1–2 percent of pregnant women in the UK, which is where a new study was created to find a link between the debilitating condition and depression. Hyperemesis gravidarum can cause women to be bed-bound for weeks on end, which could lead to dehydration and weight loss. It can also create difficulties in families, as women are often unable to work or care for their other children.

The study analyzing the relationship between severe morning sickness and depression was created by the Imperial College London and Imperial College Healthcare NHS Trust. Around 214 women were recruited from three London hospitals who were all in their first trimester of pregnancy. Half were recruited on admission to the hospital with symptoms of HG.

A similar-sized control group was set up consisting of women without significant nausea or vomiting, some of the symptoms of morning sickness. None of the participants had been treated for mental health conditions in the last year, but they were assessed for their psychological well-being in the first trimester of pregnancy and six weeks after the birth

The study concluded that of the women with HG, 49 percent experienced depression during pregnancy, known as antenatal depression, compared to just six percent in the control group. Seven percent of the control group had postnatal depression, compared to 29 per cent in the group with HG. Because of HG’s symptoms, half of the women with HG were forced to take four or more weeks off work during or after pregnancy.

A side note was added to this research, as previous research has also found that depression can have a negative effect on the bond between maternal-infant bonding. It is not known if this was a reason for eight women in the study terminating their pregnancies, despite originally expressing a desire to keep the baby.

Dr Mitchell-Jones, who was involved in the study, and who herself suffered from HG during her first pregnancy in 2018, said, “I was in and out of hospital, spent nearly six months in bed — but I was lucky enough to have a supportive and employer and family. Many women can’t afford that amount of time off work or are stay-at-home mums with young children to care for. Too often, their partners, relatives, or work colleagues are not providing the support they need because they fail to understand the severity of what these women are going through. We need to educate them, as well as healthcare professionals.”

Researchers hope that this study can help to improve the understanding of HG and change the way women with the condition are treated. Dr. Mitchell-Jones has voiced her opinion on the use of psychological screening and believes that it would be beneficial for women with HG along with referrals to mental health specialists.