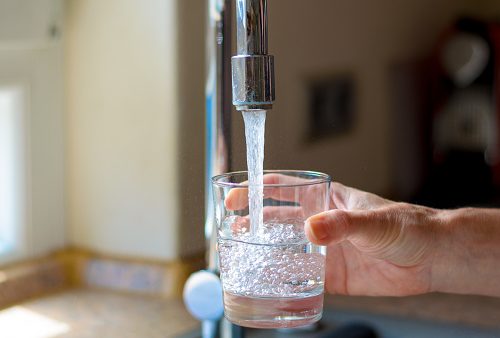 For most people, drinking tap water—which has added fluoride—is the only way they stay hydrated, while others choose alternative methods of getting water. Having small amounts of fluoride in the water can help prevent cavities, but a new study finds that those who drink tap water are more likely to have elevated lead levels in their blood.

Fluorinated tap water has been a point of contention for many years, but the study says that despite the associated lead level finding, American children and adolescents who do not drink tap water are more likely to have tooth decay.

“Elevated blood lead levels affect only a small minority of children, but the health consequences are profound and permanent. On the other hand, tooth decay affects one in every two children, and its consequences, such as a toothache, are immediate and costly to treat,” explained Anne E. Sanders, Ph.D., who was part of the study.

According to the Centers for Disease Control and Prevention (CDC), the addition of fluoride into the water supply has dramatically reduced the prevalence of tooth decay over the past 70 years. However, tooth decay is still widespread with nearly 23 percent of preschoolers having it.

Despite this improvement, lead exposure is still quite a serious condition, especially in developing children. Even low levels of lead in the bloodstream have been shown to affect IQ, ability to pay attention, and even academic achievement.


Looking at thousands of kids

The study in question looked a nearly 16,000 children and adolescents, aged two to 19, who participated in the National Health and Nutrition Examination Survey (NHANES) from 2005 to 2014. Data on dental health and blood lead levels were assessed using this demographic.

Included in the study were dietary assessments, where it was discovered that about 15 percent of the children did not drink tap water.

Elevated blood lead levels were defined as being at least three micrograms per deciliter of blood, while tooth decay was defined as the presence of one or more tooth surfaces affected by dental caries, as determined by the dental examiners.

“Our study draws attention to a critical trade-off for parents: children who drink tap water are more likely to have elevated blood lead levels, yet children who avoid tap water are more likely to have tooth decay. Community water fluoridation benefits all people, irrespective of their income or ability to obtain routine dental care. Yet we jeopardize this public good when people have any reason to believe their drinking water is unsafe,” said Gary D. Slade, BDSc, Ph.D., from the University of North Carolina at Chapel Hill.

Related: 10 reasons you should drink your water hot

The health benefit of water you didn’t know about

Is drinking eight glasses of water a day a myth?