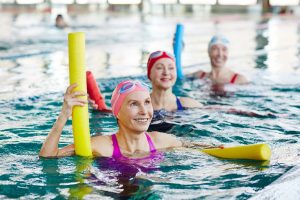 Aerobic exercise may offer a protective boost for brain aging. Scientists have previously shown that aerobic exercises are beneficial for brain health, but new research adds evidence to suggest that it may affect white matter in the brain.

The study out of Assistant Professor Aga Burzynska’s BRAiN Lab at Colorado State University provides some of the first evidence of this change in white matter, which can possibly give a boost to memory recall. White matter connects and carries signals between neurons in the brain, which is a region that is most vulnerable to aging.

In a world where the incidence of dementia is expected to double every 20 years as the population ages, studies into brain aging are critical.

For the study, researchers gathered a sample of 180 older adults who were healthy but inactive. This provided an ideal population to study when developing a baseline of the effectiveness of exercise.

Participants were randomly separated into groups that met three times per week over six months. One group walked for 40 minutes each session. Another group took a dance class that increased in intensity over six months. The final group, which was the control of the study, only followed stretch and balance exercises that purposely kept their heart rates low.

To assess the effects of physical activity on the brain, each participant had a series of magnetic resonance imaging and cognitive and cardiorespiratory testing before and at the end of the study. To gauge the change in white matter over time, the team used a technique called the T1w/T2w ratio.

Using the T1w/T2w ratio technique, the team found that participants in the dance and walking groups had an increase in white matter after six months of aerobic exercise. The group that was limited to low-intensity exercises such as stretching or balancing experienced a normal, slow decline in white matter over the six months.

The results showed that physical activity positively affected the brain’s white matter, especially in regions that are most vulnerable to aging, such as the corpus callosum and cingulum. These regions are important in cognitive abilities, such as memory and executive function.

Researchers also noted that the walking group experienced the added benefit of improved episodic memory at the end of the study, meaning they were able to recall more memories over their lifetime.

The study’s first author said, “The fact that we were able to show results in white matter in a clinical trial in only six months means that you don’t need to exercise your entire life to show some changes in your brain.”

The American Heart Association recommends 150 minutes of regular moderate-to-vigorous physical activity per week. This study helps to show the importance of exercise, not only for physical health but also for brain health and the prevention of dementia, including Alzheimer’s disease.