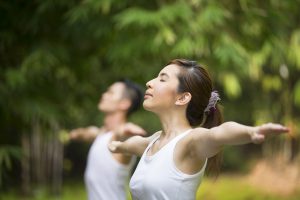 According to a new study, tai chi may help stroke survivors by relieving anxiety and depression. Researchers believe it may also improve sleep, a vital step for stroke recovery.

The study presented at EuroHeartCare examined the feasibility of using tai chi in people who had previously experienced a stroke. A total of 11 participants were enrolled in the study. All reported depression symptoms, they had an average age of 70 years, and 55% were men.

At the start of the study, mental health measurements were taken. They were then repeated after the eight-week program. Questionnaires were used to assess depression and anxiety, and sleep was determined using a triaxial accelerometer, which detects movement during the night. Sleep efficiency, the amount of time awake after initially being asleep, and total time awake after going to bed were examined.

After eight weeks of tai chi, a significant reduction in symptoms of depression, anxiety, and stress was recorded. Better sleep efficiency, less waking during the night, and total wake time were also noted.

Study author Dr. Taylor-Piliae said, “At baseline, the participants reported mild to moderate symptoms of depression, anxiety, and stress. I was surprised and pleased with the improvements we observed in these self-reported symptoms and sleep with just an eight-week intervention.”

Blood samples were also taken at baseline and eight weeks to measure markers of oxidative stress and inflammation, which have previously been associated with post-stroke depression. After the eight-week tai chi sessions, lower activity of the oxidative stress markers were found, but no changes in the inflammatory markers.

“Mind-body interventions are commonly used among adults to lessen depressive symptoms,” explained Dr. Ruth Taylor-Piliae. “Tai chi practice allows the individual to quiet the mind by dwelling in the present and setting aside unnecessary negative emotions, such as depression.”

Depression occurs in approximately one-third of stroke survivors, so studies such as this are extremely important to understand the relationship between the conditions and how to reduce symptoms. Stroke patients who report depression are generally linked with greater disability and mortality rates.