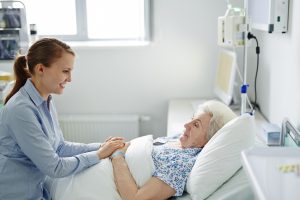 Lead researcher Dr. Phyo Myint said, “There is no clear evidence to suggest treating anemia will prevent stroke, but like in many other conditions, people with anemia should find out why they are anemic and treat the cause if possible.”

Although the exact mechanism of how or why anemia contributes to the mortality risk after stroke is unclear, the researchers did note that anemia is fairly common among stroke patients. Seniors in general often have anemia or low red blood cell count, which limits oxygen delivery in the body.

The researchers looked at data from over 8,000 patients and reviewed 20 previous studies on the subject. They found that nearly 25 percent of stroke patients were anemic, which was associated with a higher risk of death within one year following an ischemic stroke or hemorrhage stroke.
On the other hand, elevated levels of hemoglobin also implied a higher mortality risk – but in this case, within the first month after stroke. This suggests that both high and low hemoglobin levels can raise the risk of post-stroke death.

Dr. Myint added, “Clinicians should be aware of this new knowledge and appropriately manage stroke patients with anemia. This could potentially reduce the risk of dying after stroke in people with anemia.”

Still, raising hemoglobin levels in the blood may not necessarily mean better outcomes for anemic patients after stroke. As Dr. Myint explained, “Treatment will be different from one individual to another, and the management strategy will need to be decided by the clinician.”

The findings were published in the Journal of the American Heart Association.