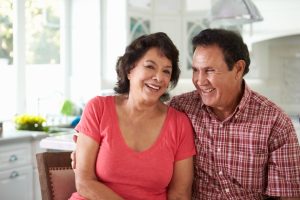 A new study has found that having a stressed-out partner can increase the size of your waist. Researcher Kira Birditt explained, “We found that your partner’s stress, and not your own, predicted an increased waist circumference over time.”

The researchers also found that quality of marriage affected waist circumference over the course of four years. The researchers suggest aiming stress-reducing interventions at couples, rather than just the stressed-out partner.

Birditt explained that monitoring your waist circumference is important as it is “an indication of excess abdominal fat and a risk factor for several different illnesses.”

For women, a waist circumference of 35 inches or more is indicative of a health problem, and for men it’s over 40 inches.

The researchers examined data from over 2,000 married men and women who answered questions about their waist size, marriage quality, and stress levels in 2006 and again in 2010.
At the start of the study, roughly six out of 10 participants had waistlines of an unhealthy size. Four years later, nine percent of participants had a 10 percent increase in their waist size.

Common notion is that your own stress levels impact your own weight and waistline size, but the present study reveals that in couples, partners’ mental state affects health outcomes of their counterparts, too.

Couples should work together on improving marriage quality and help each other reduce stress in order to keep their waistlines within a healthy range and lower their risk of illness.

Job stress and lack of control take years off life