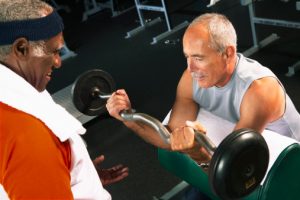 The lack of information may be due to the fact that strength training guidelines are newer, compared to those of aerobic exercises. Jennifer L. Kraschnewski, assistant professor of medicine and public health sciences at Penn State College of Medicine, said, “This doesn’t mean that strength training wasn’t a part of what people had been doing for a long time as exercise, but it wasn’t until recently that it was solidified in this way as a recommendation.”

Present research has shown the benefits of strength training not only for muscles and strength, but also for better management of diabetes, osteoporosis, lower back pain, and obesity.
The researchers looked at data from the National Health Interview Survey (NHIS) where nine percent of participants reported meeting the twice-a-week guidelines for strength training. “That’s only a small fraction of the population, but it’s actually higher than we had anticipated,” Kraschnewski said.

Respondents who met the guidelines were also slimmer, slightly younger, and were more likely to be married white males with higher education.

Kraschnewski concluded, “We need to identify more ways that we can help get people engaged in strength training so we can increase the number from just under 10 percent to a much higher percentage of our older adults who are engaged in these activities.”