Home » Health News » Strawberries in Your Diet Can Help Protect Your Brain from Alzheimer’s: Study 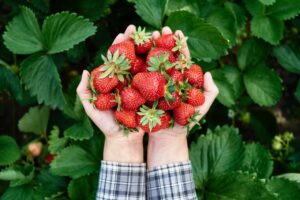 Of all the fruits in the world, strawberries may be one of the most beneficial for reducing the risk of Alzheimer’s disease.

In addition to being low in calories and high in nutrients, a new study has found that including strawberries in your diet may help protect your brain. Researchers say that the antioxidants found in strawberries can help reduce inflammation and damage to cells, both of which are associated with Alzheimer’s. So, if you’re looking for a way to safeguard your brain health, consider adding some strawberries to your next meal!

For the study, researchers from RUSH University looked at data from ongoing long-term studies conducted by the RADC, Rush Memory and Aging Project (MAP), which began in 1997. A total of 575 deceased participants were included in the study, and researchers analyzed their complete dietary information and brain autopsies.

There were a total of 452 participants who were non-carriers of the APOE 4 gene and a total of 120 participants with APOE 4, which is the strongest genetic risk factor gene for Alzheimer’s disease.

Researchers found that a bioactive compound in strawberries called pelargonidin may have played a role in fewer neurofibrillary tau tangles in the brain of participants. Tau tangles are one of the key markers of Alzheimer’s disease, which is caused by abnormal changes in tau proteins that accumulate in the brain.

“We suspect the anti-inflammatory properties of pelargonidin may decrease overall neuroinflammation, which may reduce cytokine production,” said Dr. Julie Schneider, author of the study.

Inflammation in the brain has been linked to key markers of Alzheimer’s, such as tangles and plaques. This new data suggests that the pelargonidin found in strawberries may protect the aging brain from developing Alzheimer’s disease markers.

More studies are needed to understand how strawberries can influence cytokine proteins produced by cells and how they can regulate various inflammatory responses. However, this study suggests that specific dietary components such as berries could help brain health.

While some degree of cognitive decline is nearly inevitable as you age, this study shows how dietary factors could help the brain to function at peak potential. This can affect memory, concentration, and overall brain function.

The Smart Pill may also help to enhance cognitive function and memory through 9 unique ingredients, including ginkgo biloba, huperzine A, bacopa extract, rosemary extract, and a B vitamin complex. The formulation of these ingredients is an excellent way to help fight free radicals, boost circulation, and provide nutritional support to assist with cognitive function