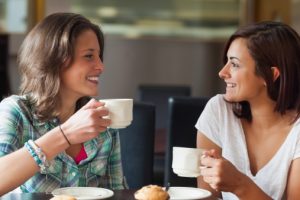 Researchers from the University of Montreal found that repeating information aloud to another individual boosts their ability to recall it later. Professor Victor Boucher from the university said, “We knew that repeating aloud was good for memory, but this is the first study to show that if it is done in a context of communication, the effect is greater in terms of information recall.”

During the study 44 French-speaking students read lexemes – words found in the dictionary – from a screen to each other. The group wore headphones, which eliminated white nose, so all they heard was the individual speaking. Students had to complete the following: repeat the word in their head, repeat silently while moving their lips, repeat aloud while looking at the screen and repeat aloud while addressing another individual. The students then were distracted and later asked to repeat the lexemes.

Repeating the words in one’s head was found least effective for recall and repeating aloud to another individual was most effective. Boucher added, “The simple fact of articulating without making a sound creates a sensorimotor link that increases our ability to remember, but if it is related to the functionality of speech, we remember even more.”

Boucher’s previous research found that by saying things aloud we create sensory and motor references in the brain, thus contributing to better recall. He added, “The production of one or more sensory aspects allows for more efficient recall of the verbal element. But the added effect of talking to someone shows that in addition to the sensorimotor aspects related to verbal expression, the brain refers to the multisensory information associated with the communication episode. The result is that the information is better retained in memory.”

Boucher concluded, “The results of our research confirm the importance of motor sensory experiences in memory retention and help to better define sensory episodes associated with verbal expression.

The findings were published in Consciousness and Cognition.