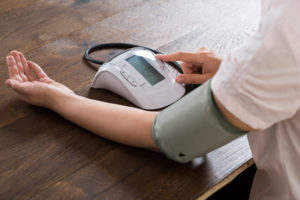 Young adults who experience wide swings in blood pressure are more at risk for cardiovascular disease by middle age, according to a new study by Duke Health researchers. Many health care professionals currently only focus on an average blood pressure reading.

The study published in JAMA Cardiology has found that the current practice of average blood pressure readings rather than watching for spikes in readings could be masking potential early warning signs. Measuring average readings is the practice currently used to determine whether medications are necessary.

“If a patient comes in with one reading in December and a significantly lower reading in January, the average might be within the range that would appear normal,” said lead author Yuichiro Yano, M.D., Ph.D., assistant professor in Duke’s Department of Family Medicine and Community Health.
“But is that difference associated with health outcomes in later life?” Yano said. “That’s the question we sought to answer in this study, and it turns out the answer is yes.”

For the study, researchers looked at 30 years of data from a large diverse cohort of young people enrolled in the Coronary Artery Risk Development in a Young Adults study. The main concern to Yano’s research team was the systolic blood pressure level.

Overall there were 3,394 participants, 46% were African American and 56% were women. All were checked regularly for blood pressure readings, and readings were evaluated across five visits, including at two, five, seven, and 10 years. By the 10-year mark, the average age of the patients was 35.

Researchers identified the young people who had variations in systolic blood pressure by the age of 35. They were able to then track them over the next 20 years to analyze their risk of cardiovascular disease.

In the conclusion of the study, participants reported 181 deaths and 162 cardio-vascular events. These events included fatal and nonfatal coronary heart disease, hospitalization for heart failure, stroke, transient ischemic attack, or a stent procedure for blocked arteries.

“Current guidelines defining hypertension and assessing the need for anti-hypertensive therapies ignore variability in blood pressure readings,” Yano said. “I think there has been a belief that variability is a chance phenomenon, but this research indicates maybe not. Variability matters.”
Researchers hope this information will convince physicians to look for blood pressure variations in early adulthood which could help to lower risk of cardiovascular events later in life. It is important to catch these variations early while there is still time to instill lifestyle changes that could improve and even extend a person’s life.