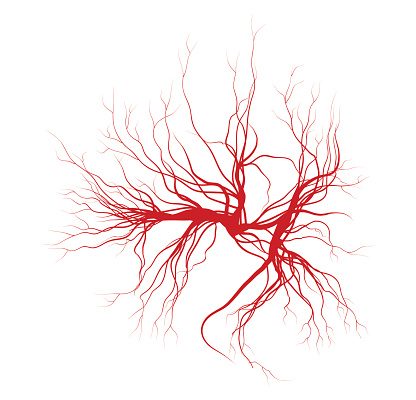 Spider angiomas go by many names, including spider veins, spider nevus, and nevus araneus. They are a collection of small, dilated blood vessels (arterioles) clustered very close to the skin surface. This clustering may take the appearance of a spider web, hence the name.

These clusters of blood vessels occur due to skin injury, sun exposure, hormonal changes, or even liver disease, but most of the time the cause is unknown. They are typically just a cosmetic abnormality, having no medical concern. In some cases, however, they may cause some discomfort. If desired, spider angiomas can be removed using a variety of methods.

One study found that 38 percent of healthy, school aged children (ages 5 to 15 years) have at least one spider nevus, while most had one to four lesions that tended to increase in number with age.

For most people, the appearance of spider angiomas are the only presenting symptom and are of no concern. They generally look like a red dot in the center with thin vessels branching out, but may appear differently in your specific case. The thin vessels form a web-like shape and may be red, blue, or even purple in color. Applying pressure to the area will usually cause them to temporarily disappear, reappearing once the blood starts flowing back.

Spider angiomas can appear anywhere on the body, with the face, neck, or sun exposed legs being the most common locations. In rare instances, some people may feel aching or burning around the angioma on the leg that may be associated with long periods of standing.

The exact reason behind spider angioma’s occurrence isn’t known, but researchers believe that numerous factors play a role in their development. These may include:

Who’s at risk of spider angioma?

Spider angioma may occur more frequently if you have the following risk factors:

Age: It is thought that aging may cause valves in blood vessels to weaken, leading to the increased formation of spider angiomas.

Hormonal changes: Instances like puberty, pregnancy, and menopause, in addition to taking oral contraceptives, may increase the likelihood of spider angioma development. Liver disease may also cause hormonal imbalances.

Family history: Despite not having a direct hereditary inheritance, spider angiomas may occur more frequently in those who have weak blood vessels running in the family.

Usually, a physical exam and the appearance of a cluster of vessels on the skin is all that is needed to make a diagnosis of spider angioma. Rarely, a biopsy will be done to confirm the diagnosis, but it is seldom needed.

Typically, your doctor will take a comprehensive medical history, including documenting any currently used medications. They may inquire about your relationship with alcohol to determine if liver disease is a likely suspect. If so, a liver panel testing for biomarkers in the blood will be performed.

Can a spider angioma be cured?

Spider angiomas do not require any treatment intervention, as they typically disappear on their own—however, this may take many years. If it is caused by a hormonal imbalance, it will resolve itself as soon as the hormonal imbalance goes away. If removal of a spider angioma is desired for cosmetic reasons, it is possible for them to reappear months later.

How to get rid of spider angiomas?

In most cases, your doctor won’t recommend spider angioma treatment directly, but instead treat the underlying cause. Dilated blood vessels on the surface of the skin do not usually pose an immediate threat to a person’s health and are, therefore, left alone. However, if the spider angioma is the cause of itchiness or discomfort, laser treatment is an option. This typically involves the use of high-powered lasers aimed at the spider angioma causing it to shrink, making it fade and disappear. Two to five treatments may be necessary for spider angioma removal.

Spider angiomas may be unavoidable, as one risk factor is simply aging. If your family has a genetic predisposition for weak blood vessels, this could also cause them to appear. There are no specific preventative measures known, but you may decrease the likelihood of their appearance by avoiding hormone therapy, protecting your skin from the sun, and controlling your alcohol consumption.

Improve blood circulation with this