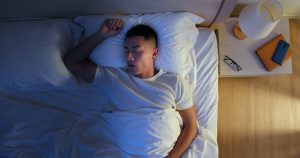 A new study of military veterans has found that sleep plays a critical role in patients healing from traumatic brain injury. The research published in the Journal of Neurotrauma showed the huge implications in loss of sleep for the armed forces and civilians who have suffered a brain injury.

For the study, researchers analyzed 65 veterans who were enrolled at the Mental Illness Research, Education, and Clinical Center at the VA Puget Sound between 2011 and 2019. They were all analyzed using a new technique involving MRI to evaluate the enlargement of perivascular spaces that are found around blood vessels in the brain. These spaces are part of the brain’s waste clearance system known as the glymphatic system. Larger areas of these spaces occur in aging and are associated with the development of dementia.

Through this method of analyzing MRIs, doctors are able to precisely measure the structure and count the number, location, and diameter of channels. Among veterans in the study, those who slept poorly had more evidence of these enlarged spaces and more post-concussive symptoms.

Lead author Juan Piantino said, “Imagine your brain is generating all this waste, and everything is working fine. Now you get a concussion. The brain generates much more waste that it has to remove, but the system becomes plugged.”

The study is the latest in a growing body of research highlighting the importance of sleep for brain health. By looking specifically at the glymphatic system, researchers are able to link its role in neurodegenerative conditions such as Alzheimer’s disease. During sleep, this brain-wide network clears away metabolic proteins that would otherwise build up in the brain.

Researchers believe this study and the new techniques developed to analyze the spaces found in the glymphatic system could be useful for older adults. If implemented in regular physical checkups, physicians may be able to predict better who is going to be at higher risk for cognitive problems, including dementia.

Sleep is a habit that can be easily modified through a variety of methods. By introducing better hygiene habits, the brain may be able to heal more effectively, especially in those who have suffered a traumatic brain injury. These habits include reducing screen time before bed, sticking to a regular schedule, cutting out caffeine a few hours before bedtime, and keeping the bedroom as dark as possible.

Piantino concluded his research, saying, “This study suggests sleep may play an important role in clearing waste from the brain after traumatic brain injury — and if you don’t sleep very well, you might not clean your brain as efficiently.”