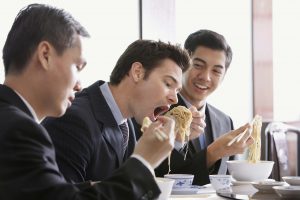 Now that we are in the wake of the holiday season, there are more get-togethers, more parties, more social functions, and most of these involve food. But research suggests that eating in social gatherings leads to overeating, especially among men. Coauthor of the study Kevin Kniffin explained, “Even if men aren’t thinking about it, eating more than a friend tends to be understood as a demonstration of virility and strength.”

The researchers recruited college-aged participants to embark either on a chicken wing eating contest with a cheering audience or a chicken wing eating competition with no audience. Although the prize was a measly plastic metal, the competitors still ate four times more than they normally would. Furthermore, men who ate in front of an audience ate 30 percent more than men who ate with no audience. On the other hand, women consumed less in front of an audience, compared to eating with no audience.

Lead author Brian Wansink explained, “Focus on your friends and not the food. If you want to prove how macho you are, challenge your friend to a healthy arm wrestle instead of trying to out-eat him.”

Connection Between Overeating and Memory Loss