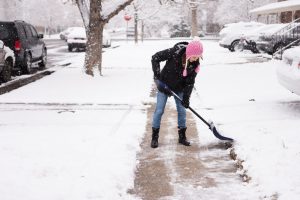 There have been some big snow dumps this year. Extreme weather patterns have hit traditionally snowy areas with larger volumes, while parts of the country that rarely see snow have been buried.

A winter wonderland may look great and even feel special for a brief period. But it can also wreak havoc and pose a host of dangers to your health.

Particularly if you’re already at high risk for heart problems.

Shoveling snow is a right of passage in colder snow-covered communities, but it is also very strenuous and isn’t safe for everybody all the time. Even if you’ve been doing it for decades, the big dumps can be a different beast altogether.

High-risk groups for snow shoveling include those over 65, as well as younger folks who tend to overdo it. People in their 50s who think they might be in decent shape, but have heart disease risk factors like high blood pressure, high cholesterol, or diabetes, are also likely to end up in the ER from shoveling.

Some people may want to avoid shoveling altogether. If you’ve had a heart attack, coronary bypass surgery, or have a coronary stent, you’re one of them.

Assessing safety is very important to minimize the risk of shoveling snow. Here are some things you can do to reduce the chance of a heart attack: