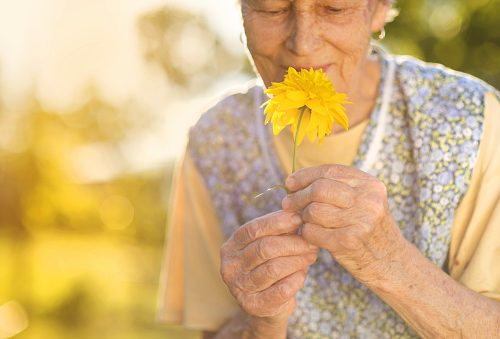 A sniff test may prove effective as a method for diagnosing Alzheimer’s disease. A recent study suggests that a poor sense of smell could be an indicator of cognitive impairment and early dementia. Researchers found that seniors who performed poorly on the sniff test were more likely to show signs of memory loss within 3.5 years. Subjects with the worst sense of smell had the highest risk of developing Alzheimer’s disease.

The research comes from investigators at the Mayo Clinic who looked at 1,430 men and women with an average age of 79. The researchers used standardized sniff tests to assess how accurately participants could identify 12 scents – including six foods, such as banana and cinnamon, and six non-foods, such as petrol, soap and roses.

At the beginning of the study participants showed no signs of dementia, and they were all tracked over the course of three and a half years.

From the group, 250 participants showed signs of mild cognitive impairment categorized as an early sign of dementia. Sixty-four of the participants went on to develop dementia and 54 developed Alzheimer’s disease.

The researchers concluded that a poor sense of smell is associated with poor brain function; however, because the researchers did not take brain scans, they cannot conclude on the strength of the link between smell and dementia risk. Researchers suspect that the deterioration of the part of the brain that coincides with smell is also linked with memory.

Losing the sense of smell can occur for many reasons and is not always linked with poor memory. Researchers suggest that, in the future, sniff tests may be combined with traditional diagnosing methods in order to better diagnose memory diseases. They wrote, “Clinical implications of our findings are that odor identification tests may have use for early detection of persons at risk of cognitive outcomes. The Brief Smell Identification Test (B-SIT) is easily administered in the outpatient setting, does not require administration or interpretation by trained personnel, has normative data, is relatively inexpensive, and is noninvasive. Thus, the B-SIT could be beneficial for screening to identify cognitively normal persons and persons with mild cognitive impairment who could benefit from early interventions to prevent or modulate risk for progression.”