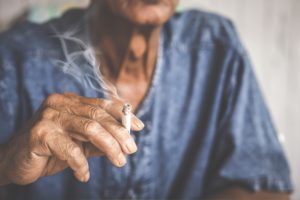 A new study out of John Hopkins warns that smoking cigarettes increases the risk of peripheral artery disease (PAD). Also shown was that the risk could last for decades even after a smoker has quit.

Peripheral artery disease (PAD) is a disease in which plaque builds up in the arteries that carry blood to your head, organs, and limbs. This can lead to pain, poor wound healing, and other symptoms. The most common form of PAD includes clogged leg arteries. It is estimated that 8.5 million people in the United States have PAD, including more than 10 percent of people over 69, according to the U.S. Centers for Disease Control and Prevention. Unfortunately, public awareness of this disorder means that most cases go undiagnosed.

This study, published in the Journal of the American College of Cardiology, outlines the importance of knowing the risk factors of smoking to help diagnose disorders such as peripheral artery disease (PAD). For this study, researchers looked to more than 3,300 current smokers, nearly 4,200 former smokers, and a few thousand people who never smoked. They were followed for a median of 26 years—half were followed for less time and half for more.

The results showed that participants who had smoked for more than 40 pack-years had a four times higher risk of PAD compared to those who had never smoked. It was also shown that they had roughly twice the risk of stroke and coronary heart disease.

Researchers for this study used “pack-years” to measure the number of cigarettes smoked per day. For example, ten pack-years can mean one pack per day for 10 years or two packs per day for five years.

The senior author of the study was Dr. Kunihiro Matsushita who is an associate professor of epidemiology at Johns Hopkins Bloomberg School of Public Health in Baltimore. He spoke about the study, saying, “Our results underscore the importance of both smoking prevention for nonsmokers and early smoking cessation for smokers.”

The takeaway from this study is that there are more reasons than ever to quit smoking, and although PAD continues to be a risk for those who have even quit, the less time spent as a smoker, the better. Making better lifestyle choices including quitting smoking, eating healthy, and exercising can go a long way towards better health. Be sure to discuss ways of quitting with your doctor.