Home » Weight Management » Smelling your food can make you fatter 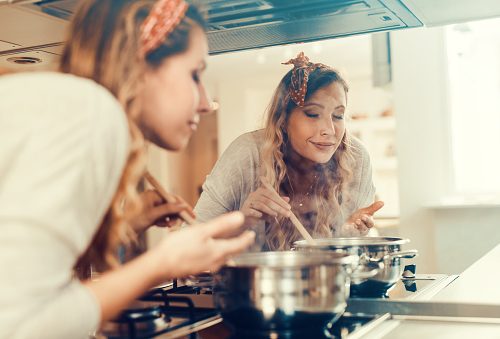 A new study finds that mice without a sense of smell do not gain weight in the same way as mice that can smell what they are eating.

Being able to smell our food has been linked to how much we enjoy eating it. Imagine walking into a restaurant and not experiencing the suddenly overwhelming scent of food in the air. The sense of smell is linked to both taste and memory. Without it, would eating be nearly as enjoyable of an experience?

Even though it wouldn’t be as exciting, not being able to smell your food while you eat can actually prevent you from gaining weight. At least, that is what a new experiment found when researchers removed the sense of smell from a group of obese mice. The study was done at the University of California, Berkeley by scientists in search of weight-gain interventions.

The scientists removed the adult mice’s ability to smell through gene therapy that destroyed the olfactory neurons but not the stem cells. The mice lost their sense of smell only temporarily while the stem cells regrew into olfactory neurons. They were then compared to a different group of mice that maintained their sense of smell. Both groups were fed the same high-fat diet.

What the researchers found was that the mice who had their sense of smell impaired burned calories at an increased rate, which resulted in drastic weight loss. The mice that retained their sense of smell actually gained weight on the diet. The smell-deficient mice lost weight by turning their beige fat cells, which store fat for later use, into brown fat cells, which burn fatty acids.

In short, these mice became fat-burning machines, no matter that they were eating the same high-fat foods as the control group. They also regained normal glucose tolerance after previously suffering from glucose intolerance, which can lead to diabetes.

Weight loss has been seen in humans who have lost their sense of smell due to age, injury, or illnesses such as Parkinson’s disease. Many times, these people become anorexic. The source of this weight loss is unclear because loss of joy in eating can cause depression, which itself can cause people to lose their appetite.

The results of this experiment are promising for potential weight-gain interventions in humans. This could mean new therapies for those who have already lost their sense of smell or for people who have trouble losing weight. In the future, researchers hope to find some way to block the metabolic systems associated with smell in humans, without having to remove the sense of smell altogether.

Related: Living in an unclean environment can make you fatter

The Common Mistake that Leads to Weight Gain