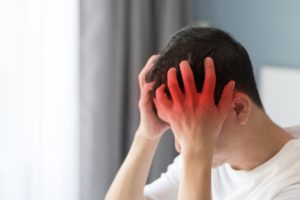 Cluster headaches are a primary headache disorder that often affects those aged 20 to 40 years of age. It is the most common of the group of headache disorders called trigeminal autonomic cephalalgias. Cluster headache patterns are thought to align with circadian rhythms, and studies have shown that they are related to sleep disturbances and differences in chronotype. But more research is needed to know the impact of such relationships in terms of pathophysiology.

Cycles Can Last for Weeks or Months

During a cluster cycle, brief but excruciatingly severe headache attacks can occur between one to eight times per night. Cluster cycles can last for weeks or months and are usually separated by remission periods of months or years.

In this cross-sectional study, adults with episodic or chronic cluster headaches were compared with healthy controls. The participants had an average age of 50.4 years and were 74.7 percent men. The study took the participants from the Dutch Leiden University Cluster headache neuro-analysis. All participants were asked to complete web-based surveys that included the Pittsburgh Sleep Quality Index, Circadian Type Inventory, Munich Chronotype Questionnaire, and Hospital Anxiety and Depression Scale.

Authors of the study concluded, “Although the exact causality remains unclear, association between cluster headache and sleep seems robust and remains intriguing. Patients with cluster headache will likely benefit from a structured, regular daily schedule.”

Cluster headache is often said to be the most painful of all headaches. It has been described as “burning,” “like a hot poker in the eye,” and as “suicide headache.” It is understandable why there are sleep disturbances in those who suffer from this type of painful cluster headache. Although not directly proven, cluster headache patients will likely benefit from a structured, regular daily schedule. More research is needed to address how those who suffer from this condition can manage symptoms which in turn could help with quality of sleep.