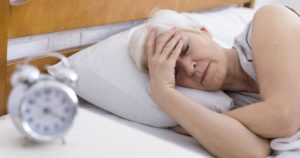 There is little research on the relationship between migraine headaches and sleep, and the link between the two is not well understood. This is why investigators from Brigham and Women’s Hospital and Beth Israel Deaconess Medical Center have conducted the largest prospective study using objective measures of sleep to date to evaluate the relationship between sleep and migraine headaches.

Researchers found that nearly half of all patients who suffer migraines report sleep disturbances as a trigger for headaches. The onset of migraine was reported not on the next day of poor sleep, but the day after that. Both diary and actigraphy were used as reporting methods to observe sleep fragmentation (time spent in bed, but not asleep).

An interesting piece of information noted by the researchers was that the link between migraine and sleep only included sleep fragmentation. They found that sleep duration or low sleep quality was not associated with higher risk of migraine over the next day or day after.

Corresponding author Suzanne Bertisch, MD, MPH, a physician and clinical investigator in the Division of Sleep and Circadian Disorders at the Brigham spoke about the study, saying, “When it comes to sleep and migraines, there’s a lot that we don’t know. I became interested in this topic because migraine patients are frequently referred to me in the sleep clinic for help with treating their insomnia. Anyone treating these patients wants to be able to counsel them on what to do to decrease their risk of a migraine, but the literature is unclear on what kind of sleep interventions may be helpful.”

The study, published in Neurology, used a prospective cohort study of 98 adults with episodic migraines, who reported at least two headaches, but had fewer than 15 days each month with a headache. All participants were required to complete electronic diaries twice a day for six weeks. They recorded details about their sleep, headaches, and health habits. They also wore a wrist actigraphy to help capture their sleep patterns. Data was adjusted for other migraine triggers including daily caffeine intake, alcohol intake, physical activity, stress, and more.

Over the course of the study, participants reported 870 headaches. It was found that sleep fragmentation was associated with higher odds of having a migraine. Sleep duration and low sleep quality were not associated with migraine.

“Sleep is multi-dimensional, and when we look at certain aspects such as sleep, we found that low sleep efficiency, which is the amount of time you’re awake in bed when you’re trying to sleep, was associated with migraines not on the day immediately following, but on the day after that,” said Bertisch. “However, we did not observe a relationship between short nightly sleep duration (under 6.5 hours) or reported sleep quality and risk of migraine.”