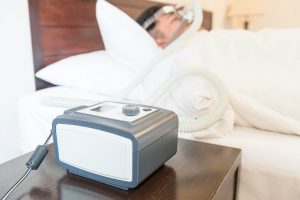 The researchers studied 24 mice with kidney tumors. Twelve were exposed to varying oxygen levels simulating intermittent hypoxia, as seen in sleep apnea. The researchers found that the tumors in the mice that were exposed to the changing oxygen levels had an increase in vascular progenitor cells and endothelial cells, compared to mice that did not undergo intermittent hypoxia. The researchers explained that these cells can create blood vessels in tumors, which can enhance their growth by supplying them with blood and other resources they require to grow.

Overall, the researchers believe that sleep apnea can contribute to tumor growth in cancer patients due to intermittent hypoxia.

Lead researcher Dr. Antoni Vilaseca said, “Patients suffering from obstructive sleep apnea usually suffer from intermittent hypoxia at night. This work shows that intermittent hypoxia has the potential to promote the formation of blood vessels within tumors, meaning that the tumors have access to more nutrients. This is, of course, an early animal study, so we need to be cautious in applying this to humans. Nevertheless, this work indicates a plausible mechanism for just why conditions, which restrict oxygen flow to tissues, like sleep apnea, may promote cancers.”

Professor Arnulf Stenzi, chair of the EAU Congress Committee, commented, “It may be postulated that increased oxygenation of the blood may be the underlying mechanism why not smoking or giving up smoking, regular sport activity (especially, endurance type sports), reducing the body mass index, and other lifestyle changes that increase tissue oxygenation have a supportive beneficial effect on better outcomes in renal cell cancer as well as other tumor types.”

As mentioned, previous research has found a link between sleep apnea and an increased risk of cancer. One study in particular was a 20-year follow-up on all-cause mortality in 400 residents in a Western Australian town. The researchers found that moderate to severe sleep apnea was associated with higher incidences of cancer and cancer-related deaths. Specifically, individuals with moderate to severe sleep apnea were 2.5 times more likely to develop cancer and 3.4 times more likely to die of cancer. Mild sleep apnea was not found to hold the same risk.

Two additional studies also revealed similar findings. In one study, the researchers found that sleep apnea increased the growth rate of melanoma cells, and in the other, sleep apnea was associated with a 10 percent increased risk of death by cancer.

It is estimated that 10 million Americans suffer from sleep apnea, which is a condition in which the individual momentarily stops breathing throughout the night. Of those, only 20 percent have received a diagnosis, which can offer them appropriate treatment to lower their risk of other sleep apnea-related complications, such as obesity, diabetes, and hypertension, to name a few.

Sleep apnea should be taken quite seriously as it can lead to many alternative health problems. Therefore, if you wake up tired, with a headache or jaw pain, or if you notice you snore or have been told you snore, speak to your doctor about undergoing a sleep monitoring test to receive a proper diagnosis and treatment.