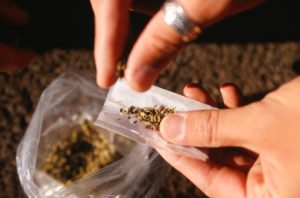 “Skunk-like” cannabis – a highly potent cannabis – has been found to cause damage to white matter in the brain – a crucial part of the brain responsible for communication between the two hemispheres. The study came from King’s College London and Sapienza University in Rome.

Previous findings suggest that long-term cannabis use is associated with psychosis, and the latest findings support such claims; researchers have found a link between high potent cannabis and changes in the brain.

Senior researcher, Dr. Paola Dazzan, said, “We found that frequent use of high potency cannabis significantly affects the structure of white matter fibers in the brain, whether you have psychosis or not. This reflects a sliding scale where the more cannabis you smoke and the higher the potency, the worse the damage will be.”

Diffusion Tensor Imaging (DTI), a Magnetic Resonance Imaging (MRI) technique, was used to look at white matter in the brain in 56 patients who reported psychosis along with 43 healthy individuals as controls.

White matter consists of nerve cell projections that connect different brain regions allowing for communication to occur. The corpus callosum is the largest white matter structure in the brain and also contains many cannabinoid receptors, which THC binds to.

Senior researcher, Dr. Tiago Reis Marques, said, “This white matter damage was significantly greater among heavy users of high potency cannabis than in occasional or low potency users, and was also independent of the presence of a psychotic disorder.” Dr. Dazzan added, “There is an urgent need to educate health professionals, the public and policymakers about the risks involved with cannabis use.”

“As we have suggested previously, when assessing cannabis use it is extremely important to gather information on how often and what type of cannabis is being used. These details can help quantify the risk of mental health problems and increase awareness on the type of damage these substances can do to the brain,” Dr. Dazzan concluded.