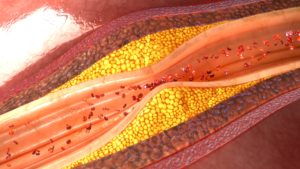 Here’s more evidence that supports the notion that we need seven to eight hours of sleep per night. Sleeping less than six hours a night can increase your risk of atherosclerosis – hardening of the arteries as a result of a build-up of plaque.

Dr. Fernando Dominguez and colleagues wrote, “Sleep deficiency is highly prevalent in Western societies, and epidemiological studies suggest that not only short but also long sleep duration is related to an increased cardiovascular risk.”

The study looked at 3,974 participants who were placed in different groups based on how much sleep they achieved: less than six hours, six to seven hours, seven to eight hours, and over eight hours.

The researchers wrote in conclusion, “Overall, our findings support the potential role of healthy sleeping in protecting against atherosclerosis. Thus, recommending good sleep hygiene should be part of the lifestyle modifications provided in our daily clinical practice.”

Therefore, if you are looking to protect your heart and reduce your risk of atherosclerosis, then finding ways to get more sleep may be your first step.