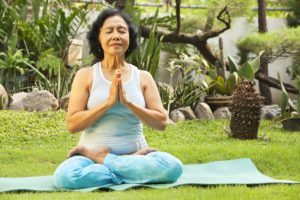 Nowadays, everyone’s looking for healthy and natural ways to combat stress, and meditation has been proven to be beneficial in this area of health. This explains why meditation is on the rise.
But other studies have shown additional benefits to meditating, like its ability to help boost your immune system.

Researchers at the University of Wisconsin found that after eight weeks of meditation training, participants produced more antibodies in response to the flu shot. They also showed greater brain activity in areas of the brain related to positive emotion compared to people who did not meditate.

This was the first study that linked meditation to changes in the brain affecting mood. It is also the first to demonstrate meditation’s benefits to the immune system.

The study involved 48 participants—half received weekly meditation training and were encouraged to meditate at home six times a week for at least an hour and were guided by audiotapes. All participants received a flu vaccination.

The researchers recorded electrical activity in the left and front areas of the brain. These areas of the brain experience more activity when a person experiences positive emotion.
Brain activity was measured several times throughout the study, and the participants recorded their positive and negative emotions. Immune response was also recorded by measuring the level of antibodies produced by the body in response to the flu shot.

Those who meditated had greater brain activity in the left and front portion of their brains and had more antibodies compared to those who did not meditate.

Researcher Richard J. Davidson explained, “Our findings indicate that a short training program in mindful meditation has demonstrable effects on brain and immune function and underscores the need for additional research on the biological consequences of this intervention.”

If you haven’t tried meditation, there are many resources available to help you get started. It’s very easy and doesn’t require any equipment, just you and your mind working together.

Related: Eat these foods for a strong immune system