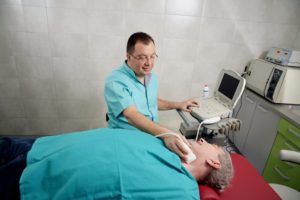 Researchers have announced that a simple neck scan may be able to provide insight into a person’s dementia risk a decade before the onset of symptoms. The scan analyzes the blood vessels in the neck and could become a regular part of the screening process for dementia.

The study involved 3,200 patients over the age of 58 who underwent ultrasounds of their necks in 2002 along with having their cognitive function measured up until 2014.

Pulses to the brain become more intense when the heart is weaker and has to worker harder to try and get blood to the brain.

Post-doctoral researcher Dr. Scott Chiesa explained, “If you can detect [the risk] in people in mid-life, it really gives an impetus to those people to change their lifestyle. What’s good for the arteries is good for the brain. Dementia is not an inevitable cause of aging. How you live your life… has a real impact on how quickly your condition can decline.”

If these research findings are confirmed on a larger scale, then neck scanning could become a part of the diagnosing process for dementia and highlight at-risk patients much earlier to begin interventions sooner.

Carol Routledge, Director of Research at Alzheimer’s Research UK, who was not involved in the study, added, “What we do know is that the blood supply in the brain is incredibly important, and that maintaining a healthy heart and blood pressure is associated with a lower risk of developing dementia.”

In the meantime, it is important that you adhere to heart-healthy practices to keep your heart strong to ensure adequate blood flow to the brain.

Also read: How dementia progresses: The 7 stages of dementia