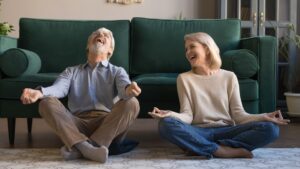 Getting older can be difficult for everyone, but a new study suggests a simple exercise routine may help keep the aging brain healthy as we get older. According to the findings, regular exercise may help protect aging brains from cognitive decline. Researchers say the benefits of exercise seem to be strongest in people who start exercising later in life. So, if you’re looking for ways to stay sharp as you age, it’s time to start moving.

Doctors have long recommended physical activity to help keep the brain healthy through aging. However, this study is the longest test of whether exercise makes any difference once someone starts to have memory issues. This research was performed during the pandemic, adding isolation to the list of risks for participants’ brain health.

The study included about 300 sedentary older adults with mild cognitive impairment (MCI) – a condition that is sometimes considered a precursor to Alzheimer’s disease. Half of the participants were assigned aerobic exercises, and the rest were required to perform stretching and balancing moves that only modestly raised their heart rate.

Participants in both groups attended the YMCA, and when the pandemic hit, they met with trainers over video calls from home.

After a year, cognitive testing showed that neither group had worsened, and brain scans did not show any shrinkage that typically accompanies worsening memory problems. In comparison, MCI patients involved in a similar study of long-term brain health experienced a significant cognitive decline over a year.

Some drugs target key markers known to lead to dementia, including amyloid plaque and metabolism to help process blood sugar and fats. However, research has shown that even with medication, effective treatment of cognitive decline requires a combination of customized strategies.

As the aging population grows and cognitive impairment cases increase, there is a growing urgency to find steps people can take to help offer protection. This study shows how simple exercise may be a helpful tool in the prevention of memory issues.

The next step in research must look at how much and what kind of exercise is needed for seniors to get the brain health effects. Some experts recommend that seniors move 30 to 45 minutes four times a week, which is an enormous task for sedentary people.

While some degree of cognitive decline is nearly inevitable as you age, this study shows how lifestyle changes can affect brain health. Along with exercise, getting the right vitamins and nutrients for brain health is vital as you age.