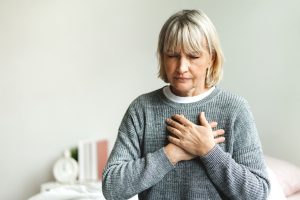 A silent heart attack often goes undiagnosed as it has minimal or unrecognized symptoms. Also known as a silent myocardial infarction, the condition can only be diagnosed with an electrocardiogram (ECG) or some form of heart imaging, such as an echocardiogram or a cardiac magnetic resonance imaging (MRI).

Some symptoms of a silent heart attack include chest pain, discomfort in the arms or legs, and dizziness. Nausea and cold sweats are also common signs that tend to be unrecognized. While some of these symptoms may be similar to those associated with a traditional heart attack, they may be less painful or intense, which is why they are often overlooked.

The study consisted of Merkler and his colleagues analyzing health information from more than 4,200 adults who participated in the Cardiovascular Health Study. All participants were 65 years or older and were enrolled from 1989 – 1990. Each was required to attend an annual study visit at multiple centers across the U.S. for ten years.

More research is needed to understand how to treat patients with a silent heart attack to help reduce the risk of stroke. Researchers believe future studies could evaluate the value of conducting a routine cardiac evaluation for silent heart attacks.