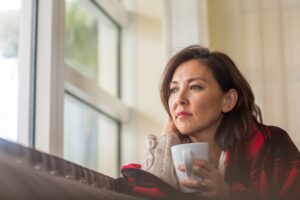 As the days get shorter, many people find themselves dealing with depression more than usual. A new study has found that this phenomenon may be due to seasonal depression, which affects an estimated 5 – 10% percent of adults in the United States.

The good news is that there are ways to cope with the seasonal affective disorder (SAD), including light therapy. If you’re feeling down as the days grow shorter, don’t hesitate to talk to your doctor about how to best deal with SAD.

The seasonal affective disorder is a condition that reflects a change in serotonin levels which has been linked to depression. According to the Mental Health America National Organization, SAD symptoms can be similar to depression, so it can be difficult to diagnose correctly. Because of this, a diagnosis of seasonal depression can only be made after two consecutive occurrences of depression that begin and end at the same time each year and come with no other symptoms during other times of the year.

As the days get shorter, you may be at risk for SAD. Winter blues are common for many people, but it could be a seasonal affective disorder for some. Symptoms of SAD include anxiety, depression, mood changes, disturbed sleep, lethargy, loss of libido, and changes in eating habits. Studies show that about 5% of the U.S. population experience SAD, but the numbers can be as high as 10% in the northern latitudes. Women seem to be more affected by SAD than men.

Over the past few years, people with SAD may have felt symptoms worsen because of stressors from the pandemic. Due to COVID, many people with SAD reported feeling more isolated or anxious.

“The beginning symptoms of SAD may exacerbate the preexisting stressors from COVID, making one less capable of dealing with issues than one might have been able to before,” said Jeannie Larson, a professor at the University of Minnesota.

The Smart Pill can help counteract these effects through nine ingredients that help support, nourish, and maximize brain health and cognitive function. These include ginkgo Biloba, huperzine A, bacopa extract, rosemary extract, and a B vitamin complex. This unique formula helps boost circulation, fight free radicals, and help to promote clear thinking.