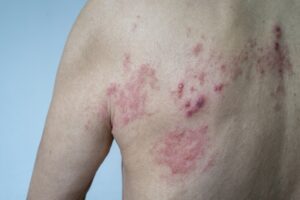 New research is revealing that if you’ve had shingles, you may be more likely to suffer from a stroke or heart attack than those who have not.

Anyone who’s ever had chickenpox has the potential for shingles. And while shingles are rather common, they are not taken as seriously as they should be, according to some experts.

Chickenpox and shingles are caused by the varicella-zoster virus. After chickenpox, the virus stays dormant in the body, hiding out in the nerves. In most cases, the immune system keeps the virus in check, but the virus may reactivate when immunity weakens due to age, illness, or medications.

The new study featured over 200,000 U.S. adults. It found that those who’d had a bout of shingles were up to 38 percent more likely to suffer a stroke in the next 12 years than those who did not.

They also had a 25 percent higher risk of heart disease, which includes heart attack.

Although the work does not prove that shingles cause heart trouble, researchers see how it is plausible.
It is possible that the reactivated virus gets into the blood vessels to cause inflammation, which may, in turn, contribute to cardiovascular episodes like heart attack and stroke.

Some previous work has found that cardiovascular risks can increase in the short term after a shingles bout. However, these results indicate the risk may not entirely disappear.

The important point is that there was no shingles vaccine available for the bulk of the study period. Now, however, a highly effective and available vaccine exists for the condition. It is called Shingrix.

The Centers for Disease Control and Prevention (CDC) recommends that adults aged 50 and up get the vaccine. Studies show it is over 90 percent effective at preventing shingles in healthy adults for at least seven years.

Getting a shingles vaccine may help reduce your risk for a stroke or heart disease, as may other factors like stopping smoking, reducing alcohol intake, limiting processed foods and maintaining a healthy weight.