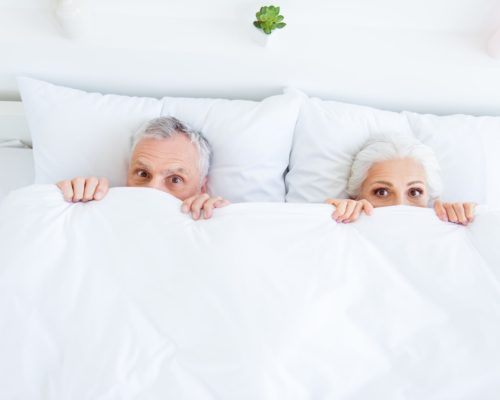 New research shows how sexual activity in older age can lead to a healthier lifestyle. Sexual intimacy is an essential part of relationships. However, it tends to decline as people age. But a new study shows just how important it is to continue into later years as it helps to contribute to an overall healthier lifestyle.

Although some couples admit to losing interest in sexual intimacy, it is a common misconception that as people age, they lose interest in sex and capacity for sexual behavior. But according to a UK survey, this isn’t the case.

This new research seems to indicate that the fewer people have sex, the more likely they are to experience both mental and physical health problems. So, the fact that the survey has found that many people are still having sex as they age is good news.

To find these statistics, the research looked at the sex lives of 2,577 men and 3,195 women aged 50 and older. They were asked whether they had experienced a decline in the last year in their level of sexual desire or frequency of sexual activity. Men were also asked if they had a decline in ability to have an erection, and women were asked about their sexual arousal.

A Decline in Sexual Desire

It was found that men who reported a decline in sexual desire were more likely to go on to develop cancer or other chronic illness that limited daily activities. Men with erectile dysfunction were also more likely to be diagnosed with cancer or coronary heart disease.

Both men and women who reported a decrease in sexual activities were more likely to rate their level of health as poor. But researchers warn that it is important to note that changes in sexual desire or function could have been a result of early-stage, undiagnosed disease.

Although the exact link between sexual activity and health later in life is yet to be determined, it is thought that the release of endorphins during sex may be part of the connection. These endorphins not only generate happy or elated feelings, but also impact mental health and activation of the immune system, which may help to reduce the risk of cancer and heart disease.

Although this was a UK based survey, other studies performed in the US report similar levels of sexual activity across these age groups. So, if you want to live a healthy lifestyle, get under those sheets and have some fun!