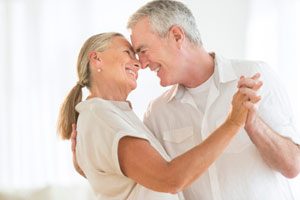 Remember the famous lyrics from the 1976 chart-topper, Golden Years? “Nothing’s gonna touch you in your golden years.” The pop star had it all wrong. Younger couples aren’t the only ones enjoying intimacy and good sexual health. Older couples can, too.

As a matter of fact, once they’ve made it to their golden anniversary, they’re even more likely to “get busy,” a new study shows.

Research conducted by Louisiana State University and published in the Archives of Sexual Behavior reveals that while younger people typically have more sex, more often, seniors experience it a little more frequently after being married for 50 years or longer. And that can mean going from having sex once every month to two or three times during the same period.

The longer the marriage, the more frequent the intimacy

The study’s findings are based on interviews with 1,656 married American adults, ages 57 to 85, which took place between 2005 and 2006. Their relationship, marital characteristics and sexual outcomes were all closely looked at in what was called the National Social Life, Health, and Aging Project.

Just chalk it up to “relationship capital,” researchers say. In a longer relationship, you’re able to better understand your partner, building on your relationship over a period of time. Simply put, you may experience a higher level of trust whenever you feel that your partner isn’t going to leave you.

The expectation that your relationship will continue just may give you more reason to invest in the sexual part of it. This translates to more intimacy and better sexual health! In other words, 50 years is a psychological milestone, too.

Here are some ways to make your long-term relationship a sexual success:

1. First, share a vision with your partner, committing to an entire life with them. What that means is not getting up and exiting the relationship whenever there’s an argument. Just knowing that you’re not going to leave each other increases your intimacy and sexual health, especially in the bedroom.

2. Don’t fight. Try to defuse situations even if you have to learn how to do it! That’s because holding grudges, allowing resentments to grow, can only get in the way of your intimacy and sexual health.

3. Schedule sex. Sure, it may not seem romantic, but it can be effective. Just set time aside once a week to get close to one another, taking turns initiating sex or even a sensual massage – if that’s all you have time for.

4. Finally, try to take turns planning “date nights.” They’re not only for new parents who are too busy taking care of their newborn to acknowledge their partner. Spicing up your days and nights is needed later in life also.

So remember: Even though your bedroom time may peter out as the years and responsibilities pile up, it doesn’t mean that sex has to stop altogether during your golden years. Make those years busy ones!

Improve your sex life with this one simple exercise

Trouble in the bedroom? It’s more common than you think. As a doctor, I find once patients open up about their sex life, they have so many questions and concerns.

There is such a thing as love and intimacy later in life, so don’t lose the passion. People over the age of 70 are more sexually active than you may realize. It’s because seniors continue to enjoy active sex lives well into their 70s and 80s, according to new research from the University of Manchester and NatCen Social Research.