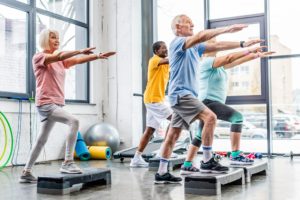 Seniors who are looking to avoid dementia should aim to live an overall healthy lifestyle. This should include getting plenty of exercise, eating well, and not smoking.

A new study published in the journal Nature Medicine found that over 6,300 adults aged 55 and older who had healthy lifestyle habits showed an overall lower risk of being diagnosed with dementia over the next 15 years. The only catch was that those who carried the genes for dementia risk might still be at risk even if they follow a healthy lifestyle.

Researchers assigned participants into groups based on the genes they carried for the study and used two different approaches. In one, they focused on the APOE gene, which has certain variants of a gene that are linked to a higher risk of Alzheimer’s disease. In the second, they considered a variety of genes that have been tied to dementia risk and assigned each participant a “polygenic” score.

Participants were also scored on certain lifestyle and health factors including exercise habits, diet and alcohol intake, smoking, and whether they had diabetes, depression, or were socially active.

The study concluded that participants who led a healthy lifestyle had a 13 percent lower rate of dementia versus 32 percent of those with an unhealthy lifestyle. This evidence also supports a number of past studies suggesting that heart-health habits may also protect brain health.

At Odds with Other Research

Although this matched a lot of previous studies, it was at odds with some past research too. Other studies have found that lifestyle choices can, in fact, make a difference even in those who have a higher genetic risk for dementia. The reason for the conflicting results are unclear, but some researchers feel that the age of the study participants could be a factor.

Rebecca Edelmayer, director of scientific engagement at the Alzheimer’s Association explains, said “It’s hard to know the reasons for that finding, or why it conflicts with some past studies.”

She does agree, however, that the message about lifestyle remains unchanged. “We have a body of evidence suggesting that adopting a healthy lifestyle is not only good for cardiovascular health, but for brain health, too.”

The latest study followed participants who were, on average, 69 years old when their lifestyle habits were measured. So, many researchers believe that adopting healthy lifestyle habits earlier in life, in middle age, or sooner are actually critical for countering a high genetic risk for dementia.

Lead researcher Dr. Silvan Licher of Erasmus MC-University Medical Center, in Rotterdam, the Netherlands said: “These results should not alter the message about the importance of a healthy lifestyle to lower the risk of dementia.”

If anything, he added, the findings offer “an extra incentive” to adopt healthy habits in life now instead of waiting any later. The benefits, Licher noted, are “numerous—including lower risks of heart disease and stroke.”

This is just one of many studies that show how important it is to adopt a healthy lifestyle no matter what age you are. Eating a healthy diet full of fruits and vegetables and exercising daily is a great way to stay in shape and feel better both physically and mentally. Although studies are finding that the earlier the better for making lifestyle changes, it is really never too late to start!