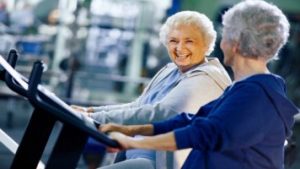 Researchers at the University of Kansas Medical Center have shown that seniors can greatly benefit from exercise when it comes to boosting brain health.

With this study researchers wanted to know how much exercise was needed to improve the cognitive function. Participants were 65 and older with no signs of cognitive impairment.

Across all groups there were benefits to brain health, but those who exercised more improve their visual-spatial processing. This refers to the ability to perceive objects in space and determine how far apart objects are from each other. In everyday life, this might be the ability to gauge where steps are, and even reading. Attention levels and focus also increased among those who exercised the most.

Jeffrey Burns, a professor of neurology and co-director of the KU Alzheimer’s disease Center, said, “Basically, the more exercise you did, the more benefit to the brain you saw. Any aerobic exercise was good, and more is better.”

Although it was shown that longer amounts of exercise improved cognitive function, intensity as well plays a role. Eric Vidoni, a professor from KU Medican Center also suggests that the goal should be to boost your fitness level as well in order to achieve benefits to your brain.