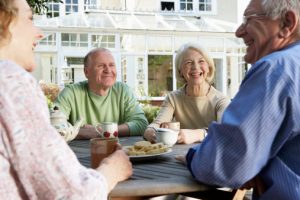 Lead author, Alan Teo, M.D., said, “Research has long-supported the idea that strong social bonds strengthen people’s mental health. But this is the first look at the role that the type of communication with loved ones and friends plays in safeguarding people from depression. We found that all forms of socialization aren’t equal. Phone calls and digital communication, with friends or family members, do not have the same power as face-to-face social interactions in helping to stave off depression.”

More than 11,000 participants over the age of 50 were assessed for the study. Frequency of in-person communication was measured, along with phone calls and written social contacts such as emails. Depression risk was determined two years later; confounding factors of health were also considered, such as living proximity to other family members and pre-existing depression.

Meeting with a family member at least three times a week was associated with the lowest risk for depression (6.5 percent). Those who only met with friends and family on a monthly basis had the highest risk of depression (11.5 percent).

The findings support the notion that being social, especially in your later years, can be an effective way to improve mental health and guard against depressive symptoms.

The findings were published in the Journal of the American Geriatrics Society.