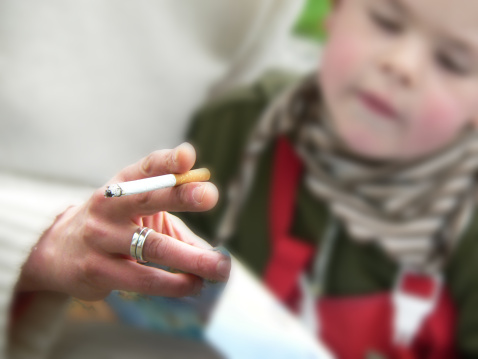 If you need yet another reason to quit smoking, a report presented at the 107th Annual Scientific Meeting of the American Urological Association  AUA) presents a very convincing argument to quit.

Researchers from the University of Medicine and Dentistry of New Jersey – Robert Wood Johnson Medical School and Robert Wood Johnson University Hospital showed that second-hand cigarette smoke was associated with moderate to severe irritative bladder symptoms in children. The study looked at children aged 4-17 years who needed care from a pediatric urologist for bladder storage symptoms including: urinary urgency, increased urinary frequency and incontinence. 28% of the children included in the study were exposed to second-hand cigarette smoke.  More than half of the children included in the study had moderate to severe bladder storage symptoms – 50% were exposed to cigarette smoke in a car and 23% had mothers who smoked. The researchers found that as exposure to second-hand smoke increased so did the severity of the bladder storage symptoms.  Additionally, children aged 4-10 years had the highest rate of severe symptoms. This research shows that exposure to second-hand smoke increases the risk and severity of urinary symptoms in children.  These symptoms could be reduced or prevented if the children were not exposed to second-hand smoke.

Yet Another Reason to Quit Smoking

The results from this research, in addition previous research on the negative effects on immune system function and lung function of children exposed to second-hand cigarette smoke, show the importance for parents to quit smoking.  By quitting you will help to reduce health problems, including bladder function problems, in your children.  If you quit smoking, your child’s lung function and immune system will improve and they will be less likely to suffer from bladder function problems.  Healthcare professionals need to counsel patients and provide resources to patients who are looking to quit smoking.  Not only will your children experience health benefits if you quit smoking, you will too!