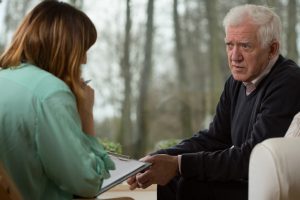 Study lead Hugh Hendrie said, “Individuals with serious mental illnesses including schizophrenia appear to be living longer than earlier estimates suggested. This good news is tempered by the fact that they now have to confront the major disorders of the elderly, including dementia. Our finding that there was a significant difference in rates of dementia for those with schizophrenia and those without the disorder was quite unexpected. The reason for this difference is unclear and merits more intensive investigation. Is this related to an increase in dementia-related brain pathology or could it simply represent a misinterpretation of their symptoms by clinicians inexperienced in dealing with individuals who have difficulties communicating and are less likely to have reliable significant others to interpret for them?”

Higher rates of heart illness and pulmonary disease are also seen among schizophrenics, along with higher mortality rate. A notable exception is cancer for which the rates were much lower.

The authors concluded that “increasing numbers of older seriously mentally ill, particularly older patients with schizophrenia, will create a serious burden for our health system that will require the development of new integrated models of health care, involving links between the health and mental health systems.”

Dr. Hendrie added, “As the population of older adults grows, the number of older patients with schizophrenia is also getting larger. We need to link their mental and physical health care in clinics where they feel comfortable and where they can be treated by clinicians who understand both their serious mental condition and their physical illnesses.”

Senior author Christopher M. Callahan explained, “People with serious lifelong mental illness have a life expectancy that is 20 to 25 years less than people without mental illness. However, many persons with these illnesses are now living into their 70s and 80s, and our healthcare system has very little experience in organizing their care in an effective manner. This study shows the major challenges we face in providing excellent care to these older adults.”


Treatment to manage schizophrenia symptoms in the elderly

With proper treatment, individuals with schizophrenia can live a normal life. Even though there is no cure, symptoms can be well managed. Medications are often prescribed to relieve hallucinations and delusions. Antipsychotics, in particular, can help with any chemical imbalances in the brain. Unfortunately, as with any medication, there is the risk of side effects – especially in the elderly.

Common side effects experienced by the elderly due to the use of antipsychotic drugs are:

By integrating a combination of medical and non-medical treatments, a person with schizophrenia can very well live a normal life.

Autism, schizophrenia, ADHD, and bipolar disorder risk in kids may be linked to older dads: Study