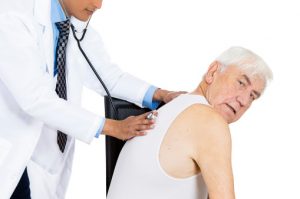 Researchers from St. Michael’s Hospital in Toronto, Canada, have found that opioid use among older adults with chronic obstructive pulmonary disease (COPD) increases health risks. Dr. Nicholas Vozoris from the hospital said, “The new use of opioids was remarkably high among adults with COPD living in the community. The amount of opioid use is concerning given this is an older population, and older adults are more sensitive to narcotic side effects.”

Researchers analyzed records from over 120,000 Ontario seniors over the age of 66 with COPD. Between 2003 and 2013, 70 percent of COPD patients living in their own home were prescribed a new opioid treatment, while 55 percent were in long-term care. Those in the long-term care facilities were found to potentially be using the treatment excessively, having been given multiple opioid prescriptions, early refills and prescriptions lasting longer than 30 days.

Opioid treatment is commonly prescribed for COPD to treat chronic muscle pain, breathlessness and insomnia, noted Dr. Vozoris. Side effects of opioid use include an increase in falls and fractures, confusion, nausea, vomiting and abdominal pain.

Dr. Vozoris added, “Sometimes patients are looking for what they think are quick fixes to chronic pain and chronic breathing problems. And physicians sometimes believe that narcotics may be a quick fix to COPD symptoms.”

Dr. Vozoris actually believes opioid use can negatively impact lung function by reducing rates and volume of breathing, which reduces oxygen in our blood cells and increases carbon monoxide levels.

“This is a population that has chronic lung disease, and this drug class may also adversely affect breathing and lung health in people who already have chronically compromised lungs,” Dr. Vozoris said. He concluded, “Patients and prescribers should reflect on the way narcotics are being used in this older and respiratory-vulnerable population. They should be more careful about when narcotics are used and how they’re being used.”

The findings were published in British Journal of Clinical Pharmacology.