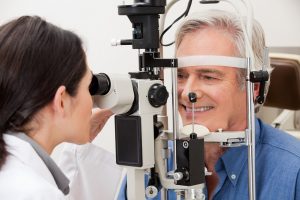 Scientists at the Joslin Diabetes Center conducted a study that found the association between cognitive disorders and a change in the retina in older people with type 1 diabetes.

Previous research had shown a relationship between proliferative diabetic retinopathy (PDR, a complication of diabetes that can severely damage eyesight) and cognitive impairment in people with type 1 diabetes. This insight into the changes in the brain associated with the cellular changes in the retina led researchers to this new study, which used imaging techniques to show changes in cognitive function.

The study enlisted 129 participants in the Joslin Medalist Study, which analyzes outcomes among people 50 years or younger who have type 1 diabetes. Researchers drew on the participant’s routine eye scans to get a better understanding of their eye health. One set of scans was based on optical coherence tomography (OCT, a technique employing light to provide cross-sections of the retina). The second set of scans employed OCT angiography (OCTA, an extension of OCT technology that examines blood vessels in the retina).

Along with the eye tests, participants took a series of cognitive tests that included tasks testing memory function as well as psychomotor speed, which assessed the time it took to arrange objects by hand.

Researchers found that there was a strong association between performance on memory tasks and structural changes in deep blood vessel networks in the retina. Since memory is the main cognitive task that is most affected by Alzheimer’s disease and cognitive decline, this shows a direct correlation between the retina’s changes and many common cognitive problems.

The most common way to currently detect Alzheimer’s disease conditions are MRI scans, which can be difficult and expensive. These tests are also not generally ordered until people are already showing signs of cognitive decline, which could be too late for preventative treatments.

“If you can detect the condition at an earlier stage, when they’re still asymptomatic, that may benefit patients,” said Ward Fickweiler, MD, a Joslin postdoctoral fellow and first author on the paper. “Earlier detection also could aid the quest to develop better therapies for neurocognitive diseases.”

While these results need to be confirmed in larger clinical investigations, routine eye and vision exams seem to detect cognitive changes in people with diabetes. With regular exams, any changes in the retina can be detected, and cognitive decline treatments could be administered early in the diseases’ progression.