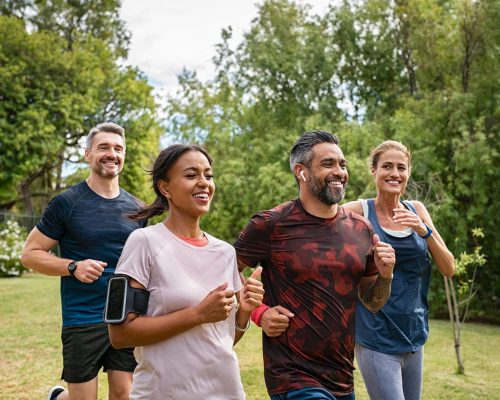 Exercise can play a great role in preventing the development of fatty liver disease. A new study from the German Center for diabetes research (DZD) has shown which molecular adaptations of the liver mitochondria are observed during exercise.

Some mice were fed a high-energy diet for this study, while others received regular treadmill training. After following the upper six weeks, researchers examined the animal’s livers and muscle strength for changes in the transcriptome, the mitochondrial proteome, lipid composition, and mitochondrial function.

They found that exercising regulated important enzymes of fructose and glucose degradation in the liver as well as the mitochondrial pyruvate metabolism.

Overall, this process helps less fat to be stored in the liver, and specific lipids such as diacylglycerol species are lowered. In the exercised mice, glucose control was also improved, and an increased respiratory capacity of the skeletal muscles relieved metabolic stress in the liver.

Prof. Dr. Cora Weigert said, “This shows that regular physical activity regulates many targets at the same time as key notes of metabolic pathways, an effect that cannot be achieved with monotherapy.”

One in four people suffers from non-alcoholic liver disease (NAFLD), also known as metabolic liver disease (MAFLD). Of those affected, patients often also have type 2 diabetes as well as an increased risk of liver cirrhosis and cardiovascular disease. This condition is also widely associated with increased mortality.

NAFLD is believed to be due to an imbalance between energy intake and consumption. This imbalance leads to fat deposits in the liver and can impair the function of the mitochondria over time. These are both risk factors for developing hepatic insulin resistance and liver inflammation.

As one of the essential organs in the body, the liver needs to be protected. But with our modern lifestyles, it is constantly put under significant stress. Liver Rescue is a formula designed to support and maximize the performance of a healthy liver. With a combination of 7 ingredients, Liver Rescue can give your liver the support it deserves.