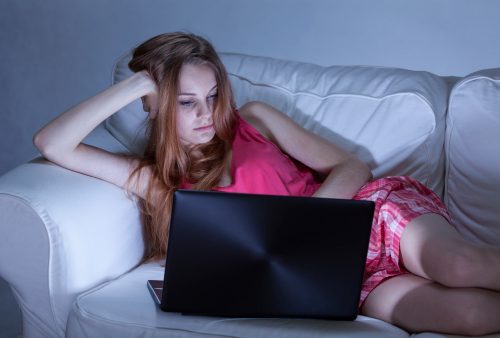 Previous research highlighted health consequences linked with heavy internet use, such as addiction, anxiety, depression, obesity and social isolation, but never before has blood pressure been studied.

Andrea Cassidy-Bushrow, Ph.D., from the hospital said, “Using the internet is part of our daily life but it shouldn’t consume us. In our study, teens considered heavy internet users were on the internet an average of 25 hours a week. It’s important that young people take regular breaks from their computer or smartphone, and engage in some form of physical activity. I recommend to parents they limit their children’s time at home on the internet. I think two hours a day, five days a week is good rule of thumb.”

Dr. Cassidy-Bushrow suggests the findings can better help school nurses when monitoring health adding, “School nurses could conduct annual health screenings where blood pressure and internet use behaviors could be assessed. Students with an elevated blood pressure would then have a follow-up visit to determine next steps.”

Data was collected from 335 teens where the teens completed a survey about their internet use one week prior to a physical exam. Their findings revealed that teens spend an average of 15 hours a week on the internet. Boys tend to spend more time online than girls and heavy internet users tended to be overweight in comparison to light internet users.

The findings were published in the Journal of School Nursing.