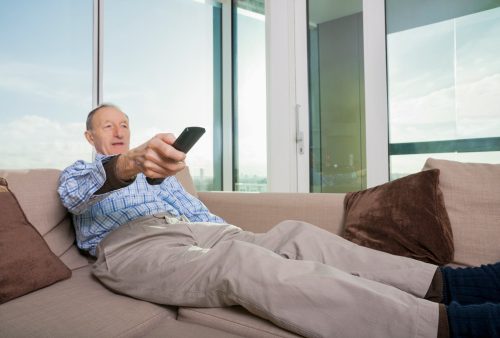 After a busy day, there is nothing nicer than sinking into your couch in front of the TV. Flipping through the channels and dozing off may seem like a relaxing night, but this habit can increase your risk of a dangerous blood clot.

The study followed over 15,000 people and the researchers found that the participants who reported watching TV the most had a higher risk of blood clots compared to those who watched TV the least.

It has already been established that prolonged TV watching is associated with a higher risk of heart disease as a result of the development of blood clots. This more recent study is the first to explore the link between venous thromboembolism and TV watching among a large western population.

Venous thromboembolism is an umbrella term encompassing different types of blood clots including deep vein thrombosis and pulmonary embolism. Blood clots can occur at any age but those over the age of 60 are at the highest risk. When a blood clot exists, it prevents blood flow from circulating properly. If this clot breaks off and travels to the lungs, it can become a deadly situation.

The study included data collected for the Atherosclerosis Risk in Communities Study where participants aged 45 to 64 free from blood clots reported their TV viewing time. They were separated into groups based on their reports. Events of blood clots were detailed during the follow-up period.

In the follow-up period looking at 299,767 people, 691 blood clot cases were identified. The researchers found a dose-response relationship between TV watching and the risk of developing a blood clot.

Even the participants who met the requirements of physical activity per week still had 1.8 times higher risk of blood clots if they watched a high amount of TV compared to those with the lowest TV watching reports.

Obesity was seen to be common among those with the highest TV watching time but it only accounted for 25 percent of blood clot cases.

As with many other studies that have come out as of late, this one is just another warning against the dangers of prolonged sitting. The authors advise reducing your TV watching time as a means of reducing the risk of a deadly blood clot. If you must watch TV, either put a treadmill or stationary bike in front of your TV or delay TV watching by 30 minutes each day so you can go for a walk. Furthermore, avoid snacking in front of the TV too, as it will contribute to obesity, poor eating habits, and other health problems over time.