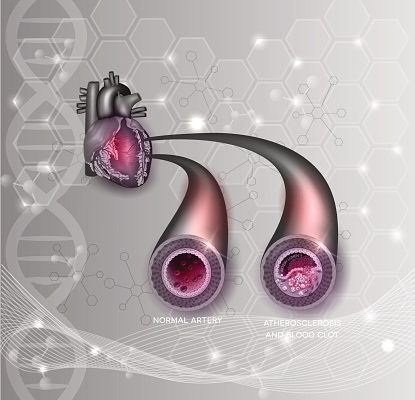 The medical term for a clogged or blocked artery is stenosis. This can occur when there is an excess amount of plaque, which is made up of fat, cholesterol, calcium, or other substances circulating in the blood. When there is an accumulation of plaque on the inner walls of a vessel, this can lead to the blockage of the vessel and a decreased blood supply to tissues. This process can be commonly seen in the coronary artery that supplies blood to the heart, and it can lead to angina (chest pain) and a heart attack.

A stenosed blood vessel is commonly treated before it is completely blocked. This is accomplished through angioplasty and stenting. These procedures aim to alleviate the stenosis by inserting a balloon catheter or a small mesh tube (a stent) into the occluded blood vessel to keep it open.

So then what is restenosis? A simple restenosis definition is as follows: the restenosis meaning is the reoccurrence of stenosis. It occurs in as many as 40 to 50 percent of people who have been treated using angioplasty alone. It was only in response to this growing problem that stents were developed. Newer and more advanced stents can help decrease the chances of restenosis to about five to seven percent over five years.

Symptoms of restenosis include angina and heart attacks.

When a stent is placed in a stenosed blood vessel to help keep it open, new tissue grows around it until it becomes very much like the normal lining of the artery. This phenomenon is the main reason this method of treatment is so effective, as it allows for blood to flow freely through the stent without clotting. However, scar tissue can occasionally form underneath the healthy tissue and if it grows large enough, it can cause vascular restenosis.

It is believed that localized trauma during angioplasty results in abnormal healing, with restenosis usually occurring within three to six months after angioplasty and stenting. Two types of stents are commonly used in surgery: bare metal stents and drug-eluting stents. The latter is coated with a special drug that is released very slowly over time. Bare metal stent restenosis is more common than restenosis caused by drug-eluting stents.

The drug-eluting stent restenosis rate is lower because this device inhibits the proliferation of plaque, inflammatory cells, and smooth muscle cells. Unfortunately, it also prevents normal growth of the endothelium that covers the blood vessel wall. This becomes a problem years later when the drug-releasing effect has dissipated, leaving the metal surface of the stent exposed. This increases the chances of developing a blood clot inside the vessel (thrombosis).

Arterial restenosis can also occur via other processes. Recurrent atherosclerosis, a condition that likely occluded the blood vessel in the first place, may be a cause, but it tends to trigger restenosis after angioplasty about a year or more following the procedure.

Stent implementation may also result in hypersensitivity reactions depending on the type used. Stainless-steel stents that release nickel or molybdenum ions may cause a reaction. However, newer stents implanted today are commonly made of cobalt-chromium, which significantly reduces hypersensitivity.

Mechanical issues may also lead to restenosis. These include under-expansion of the stent, improper application of the stent to a vessel wall, or difficulty in implantation that impairs the drug-eluting properties of the stent.

How to prevent restenosis

Prevention of restenosis depends on several factors, such as the type of stent used and the skill level of the surgeon implanting it. The use of various medications and techniques that reduce the proliferation of vascular smooth muscle cells (neointimal hyperplasias), such as gene-based therapies and nanoparticle drug delivery, may prove adequate in restenosis prevention.

Implementing healthy lifestyle changes such as regular exercise, lowering blood pressure, quitting smoking, and cutting down on fat and alcohol can help to prevent further clogging of your arteries.

Vascular brachytherapy is a technique used to prevent and treat restenosis. The process involves short-range ionizing therapy that inhibits neointimal hyperplasia, effectively preventing shrinkages of the arterial lumen (the hollow passageway in a vessel through which blood flows) after angioplasty. This process inhibits smooth muscle proliferation and increases the number of cells that enter the apoptosis pathway (programmed cell death). Vascular brachytherapy results in less fibrosis and less negative remodeling or healing that can lead to a shrunken lumen.
Vascular brachytherapy can be used alone or follow an angioplasty. It is performed through a special catheter that is placed for 10 minutes in the blocked vessel and exposes the tissue to short-term radiation.

How to treat restenosis

Restenosis can be a challenging condition to treat. Treatment is often influenced by how severe the blockage is, where it is, the patient’s age, and whether the patient has any other existing medical conditions that may affect their overall survival. These factors are especially relevant if a repeated percutaneous angioplasty or open-heart surgery is being considered.

Medical treatment using drugs is common after the first angioplasty for the prevention of restenosis. Drugs may also be used to treat a restenotic vessel in the early stages. They can be ingested orally, applied intravenously, or directly targeted to the site of the occlusion.

Medications used to prevent or treat restenosis include:

Medications that are specifically targeted to the site of the blockage are often preferred. This is because targeted treatments have fewer side effects and are effective at lower doses, and there is no need for repeated doses.