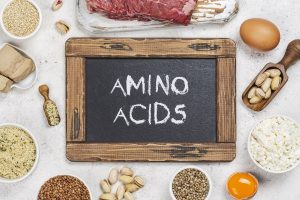 A recent animal study has shown that an amino acid diet could slow brain degeneration and dementia development. The study was focused on Amino LP7, a supplement containing seven specific amino acids which had previously been shown to improve cognitive function.

Dementia is a condition that involves extreme loss of cognitive function and is caused by various disorders, including Alzheimer’s disease. According to World Health Organization estimates, approximately 10 million people worldwide develop the condition each year, indicating a high social impact. Many people also report a psychological impact with dementia.

The study published in Science Advances first studied how a low protein diet can affect the brain in most models of Alzheimer’s disease. This generally demonstrates neurodegeneration and abnormal proteins called “Tau,” which accumulate in the brain. It was found that mice who consumed a low protein diet showed accelerated brain degeneration and had signs of poor neuronal connectivity.

These effects were found to be reversed after supplementations with Amino LP7. Researchers believe the combination of the seven specific amino acids could inhibit brain damage.

For the second part of the study, the research team examined how Amino LP7 affects different signs of brain degeneration in the Alzheimer’s model. Mice who had been taking the Amino LP7 treatment suppressed neuronal death, thereby reducing brain degeneration even though the Tau proteins remained.

According to Dr. Akihiko Kitamura, who led this study, “Tau plaques in the brain are characteristic of Alzheimer’s, and most treatments target them. However, we have shown that it is possible to overcome this Tau deposition and prevent brain atrophy via supplementation with Amino LP7.”

To understand how Amino LP7 protects the brain, researchers analyzed the gene-level changes induced by the supplement. They found that Amino LP7 reduces brain inflammation and prevents kynurenine, an inflammation inducer, from entering the brain.

All of this then prevents inflammatory immune cells from attacking neurons. It was also noted that Amino LP7 reduces neuronal death and improves neuronal connectivity improving overall brain function.

Overall, this study helps to show that following an amino acid diet can help maintain balance in the brain and prevent cognitive impairment. This study is the first to report specific amino acids that can hinder the development of dementia. Although the analysis was performed in mice, researchers hope the findings of the amino acid intake could also modify the development of dementia in humans, including Alzheimer’s disease.

Researchers believe this study will open several avenues to understand better how dementia occurs and how it can be prevented.