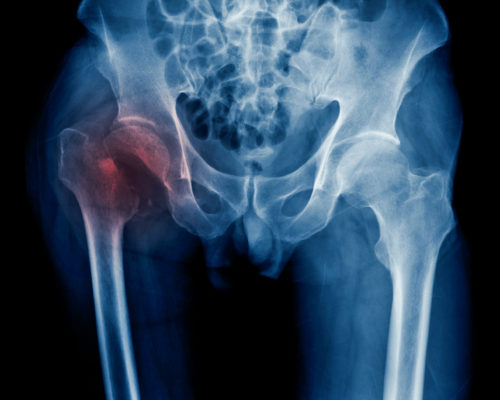 For many people with low bone density, there is a high risk of hip fractures. However, new research has found that it may not only be the density of the bone that is to blame—it may also be due to the flexibility of the bone.

The findings of the study published in Scientific Reports analyzed results from patients who have had DEXA scans, which look at the pores and density of bones. This scan can help physicians detect bone weakness in people with osteoporosis.

What they found was that some people whose bones seemed healthy on DEXA scans were more likely than others to suffer fractures. This led researchers to look at the building blocks of bone using high energy intense beams of X-rays. They were able to see the stiff minerals surrounding flexible collagen fibrils at the nanoscale. This collagen is responsible for the bones’ resistance to fractures during trips and falls.

Study co-author Dr. Ulrich Hansen of Imperial’s Department of Mechanical Engineering said: “We tend to think of our bones as solid, hard support structures, but flexibility appears to be extremely important in bone health. If bones are too hard, they are less able to absorb impact and more likely to break. Our study suggests that flexibility could be just as important as density in preventing fractures.”

Reduce the Risk of Fractures

Bisphosphonates are clinically proven to reduce the risk of bone breakage by increasing bone mass and mineral density. They also fill pits created by overactive bone cells. Researchers hypothesize that in some bisphosphonate users, the drug might bind itself to and harden the mineral crystals that surround the collagen fibers within the bone. The hardening could make bone less flexible and less able to absorb impact.

Currently, the treatment for bone fragility focuses on the mineral density, but this study highlights the role of other factors like collagen and the interaction between mineral and collagen at the nanoscale. More research is needed to fully understand the relationship between fractures, bone density, and bone flexibility.