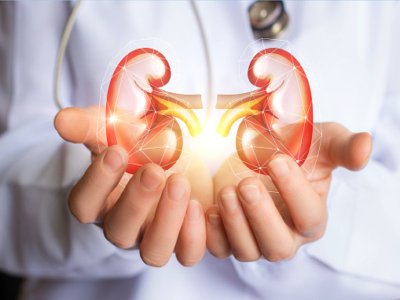 The quick and simple answer is that it is high blood pressure due to kidney problems. Renal artery stenosis, which is the narrowing of one of the renal arteries, can interrupt blood flow to the kidney, leading to renal hypertension. In the medical community, it is referred to as a secondary type of high blood pressure. Data shows that renal hypertension is most often diagnosed among the elderly population and has a significant impact on patient prognosis. For instance, people over the age of 67 who are diagnosed with renal hypertension are six times more likely to experience a cardiovascular event and death.

What are the causes and symptoms of renovascular hypertension?

As we just pointed out, renovascular hypertension causes are related to narrowing of the arteries that deliver blood to one or both kidneys. When kidneys aren’t receiving enough blood, they react as if they are experiencing dehydration. What essentially happens is the kidneys react by releasing hormones that cause the body to retain water and sodium.

When blood vessels fill up with this additional fluid, blood pressure rises. Causes of renal hypertension include atherosclerosis, which is a hardening of the arteries, and fibromuscular dysplasia, a condition whereby the structure of the renal arteries develops abnormally for unknown reasons. Atherosclerosis is the most common cause and is the same process that is linked to heart attacks and stroke.

What most medical experts recommend is that we pay attention to high blood pressure signs. If you think your blood pressure may be elevated, see a doctor.

Here are some symptoms associated with high blood pressure levels.

If you have ever wondered why regular doctor visits are important, especially as you get older, blood pressure has something to do with it. Getting an accurate check of blood pressure can help provide a warning about other potential health problems, like renal hypertension.

Renovascular hypertension diagnosis is usually an after-thought. Most doctors will think of renal hypertension only after blood pressure has suddenly worsened in an older patient, develops in a younger patient, worsens along with kidney function, or is difficult to control even though the patient has tried three or more blood pressure medications.

Sometimes, listening to the neck or even the belly with a stethoscope can help detect narrow arteries because it makes a whooshing sound. Below is a list of other tests that are used in the diagnosing of renal hypertension.

Duplex ultrasound: This is basically an ultrasound that can show a blockage in the renal artery or blood that is moving through arteries at a higher-than-normal speed. It is considered a good starting test but doesn’t always pinpoint all cases of renal artery stenosis. Having a highly skilled technician performing this test is key.

Computerized tomographic angiography, or CTA: This is a procedure that uses x-rays and a computer to create images. A contrast medium is injected into the patient’s arm so that the structure of the arteries shows up clearer.

Magnetic resonance angiogram, or MRA: In this test, the images can show blood flow and organ function. A contrast medium is used to get a better view of the arteries and the patient slides into a tunnel-shaped device for the test.

Catheter angiogram: This is a special x-ray that involves threading a catheter (thin tube) through large arteries into the renal artery. A small slit is made in the groin area to gain entry. A contrast medium or colored dye is injected through the catheter so that the artery shows up clearly on the x-ray. If narrowing is seen, angioplasty, which is dilating the artery with a balloon that keeps the vessels open, can be performed.

Radionuclide imaging: The radionuclide imaging is conducted before and after an oral dose of captopril, an ACE inhibitor that causes the affected artery to narrow and decrease profusion on a scintiscan. A scintiscan is a two-dimensional map of gamma rays emitted by the radioscope that reveal its concentration in the organ or tissue surrounding it.

Unfortunately, renal hypertension treatment in the form of medications doesn’t work for everyone. For some individuals, medical procedures are needed. Some of the procedures commonly used by doctors are listed here.

Some studies suggest that progression of atherosclerosis may occur in as many as one-third of renal hypertension patients. Blood pressure control obviously plays an important role in managing renovascular hypertension, but so does lifestyle. Quitting smoking is important, as it is a risk factor for cardiovascular ailments. Elevated cholesterol levels can also lead to blockage of arteries and result in hypertension and renal artery stenosis. Losing weight, if necessary, as well as eating a heart-healthy diet is highly recommended. Exercising and reducing stress can also help those who have been diagnosed with renovascular hypertension.


Prevention and prognosis of renal hypertension

Fibromuscular dysplasia, which is the result of abnormal growth of cells in the walls of the arteries leading to the kidneys, can run in families. In these cases, renovascular hypertension prevention is not possible. Since not all cases are hereditary, prevention of renal hypertension is possible for many people. Eliminating smoking, reducing alcohol intake, limiting caffeine and sodium intake, exercising at least 30 minutes a day, and avoiding stress when possible are all good preventative approaches.

Renal hypertension prognosis varies from person to person. Evidence suggests that early diagnosis and treatment can make a big difference in long-term outcome. When a patient has atherosclerosis, it has a strong potential to lead to end-stage renal disease. In other words, atherosclerotic renal artery disease is a strong indicator of increased mortality relative to the general population.

The good news is that when there has been some renal function impairment, relief of stenosis (narrowing) when achieved early enough can lead to dramatic improvement. Renal artery stenosis is a major cause of renovascular hypertension and is thought to be responsible for up to 10 percent of the 50 million cases of hypertension in the United States.

It is important to know that just because someone else in your family has hypertension, doesn’t mean that you will automatically get hypertension. What it does mean is that you should pay attention to your blood pressure as well as any other signs associated with elevated pressure. While there are ways to take your blood pressure, such as purchasing a pressure monitor and using it at home, it is best to have a doctor check your blood pressure from time-to-time to ensure you are getting an accurate reading.